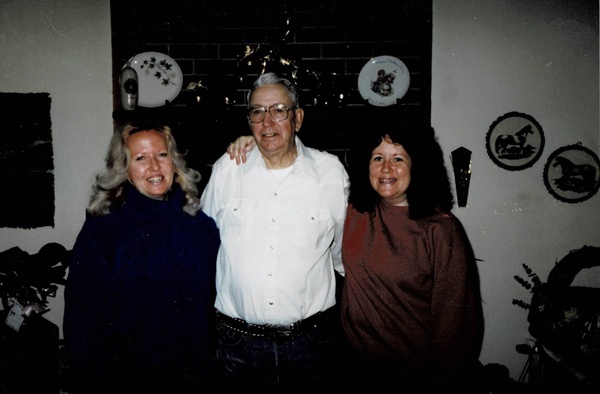 Sharon Davis, Shown with Her Dad ‘Francis Davis' and Her Sister, ‘Candace Davis' at Home on The Mulvane Ranch. THE MEMORIAL SERVICE HAS BEEN MOVED TO THE ROSSVILLE CHRISTIAN CHURCH DUE TO THE WEATHER Sharon's Story Sharon Ione Davis entered this world on December 13th, 1942 to her parents Donice Ione (Marney) and Francis E. Davis of Rossville, Ks. Sharon spent her childhood growing up on the Mulvane Ranch and Farms West of Rossville where her father had became Manager and a Business Partner. The old ranch house and most of the ranch buildings were destroyed by the flood of 1951 when the Kansas River overflowed its banks. A new ranch home was built after the flood waters receded and the Davis family remained to rebuild the ranch. Sharon participated in Brownie and Girl Scouts as a young girl and was a member of the Rossville 4-H Club where she raised and entered her prize winning 4-H calves in the 4-H Fair. Sharon was attending a sewing class in the Home Economic's Department at Rossville High School on January 14th, 1958 when her mother drove by ‘honking the horn'. ‘Donice' was on the way to the hospital to deliver Sharon's younger sister ‘Candace Davis'. Despite their age difference, Candace and Sharon formed a loving relationship and shared many good times growing up and throughout their lives. Sharon's Classmates will remember Sharon as a cheerleader in high school and riding around in her ‘Classic 1959 Black Impala'. Many ‘Happy Days' were spent with her friends and classmates having numerous slumber parties, campouts, horse-back and hay-rack rides, and just getting off the school bus in time to watch Dick Clark's American Band Stand. It was always ‘fun' to go to the Community Center on Saturday nights for a tri-city ‘sock hop' sponsored by the Disc Jockeys from a Topeka radio station. Sharon graduated from Rossville High School in 1960 and in 1961 she earned a Secretarial Certificate from the Clarks Bs. School in Topeka, Kansas where she became employed as a secretary in the office at the Topeka State Hospital. In 1963, she moved to Phoenix, AZ and she obtained a position as a Secretary and Title Clerk for Stewart Title. A few years later, she returned from Phoenix to Rossville to work with her dad on the ranch. ‘Francis Davis' was over-heard saying that ‘Sharon' was one of the best truck drivers that he had ever hired to fill silos. Sharon loved horses and was good at barrel racing. She was often seen in local parades and rodeos. In 1971 she was elected Queen of the Rossville Centennial and rode in the Centennial's parade in a horse drawn carriage. Sharon's sister, Candace and her dad, Francis Davis also rode their horses in the Rossville Centennial. Sharon enjoyed home making, working with her mother and sister in arts and crafts, especially ceramics. Ranch hands would testify that she was a ‘good cook' too. In 1978 and having an adventuresome spirit Sharon wanted a new career so she took her love of horses to the Denver, Colorado area where she had answered an ad for a ‘Training Assistant and Groomsman' in the horse racing business. Thus, she assisted in training and groomed numerous race horses in Denver, Lincoln, Omaha, and even in Chicago. She met her future husband, Michael Pierce in Nebraska. They were married in Lincoln on June 17, 1980 and they became business and marriage partners for over 42 years. The couple settled in Paulden, AZ, a small community located near Prescott, AZ . Not only did Sharon and Mike race, own and train horses they sponsored two Venezuelan families obtain U. S. citizenship and they were also ‘Big Brothers' to two boys. Together, Sharon and Michael continued in the horse racing business until December of 2018 when they sold the last of their horses in order for Michael to devote full time to caring for Sharon. Sharon Passed away on April 30, 2019, Prescott, AZ after a long illness. A Memorial Service will be held at the Rossville Cemetery near her parents gravesites at 11:00 A.M., Saturday, May 25, 2019. Sharon is survived by her husband, Michael Pierce of Paulden, AZ and Sharon's younger sister, Candace Davis of Monett, Missouri along with numerous cousins both on the Marney side, as well as the Davis sides of the family.

To order memorial trees or send flowers to the family in memory of Sharon Pierce, please visit our flower store.