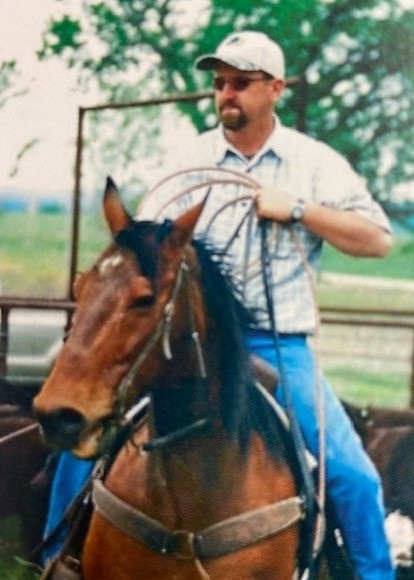 Shane was born November 6,1966 in Swedish Hospital, Englewood, Colorado. He lived in Sedalia, Colorado until the family moved to Maple Hill when he was 6 years old.

He attended St. Mary’s High School, graduating in 1985. Shane was very athletic and qualified for two events at the Kansas State High School Track Meet his senior year, medaling in both.

After finishing high school, Shane worked in the construction industry for a number of years. After that, he moved to Butler County, KS to operate a grazing operation in the Flint Hills. In 2012, he moved back to Maple Hill and started working for Hier Ranch, LLC. He was an avid outdoors man. He loved hunting and fishing.

Shane is survived by his father, Thomas C Hier and stepmother Grace Hier of Maple Hill. A sister, Noel Miller and a brother, T Layne (Nancy) all of Maple Hill. He is also survived by four nephews, Chisholm (Sara) Miller, Hunter, Halen and Heath Hier.

He was preceded in death by his mother Mona F Hier, and a brother-in-law David Miller.

At his request, no visitation or funeral is planned. He is to be cremated and requested that his ashes be spread over the Flint Hills that he loved. That will be scheduled at a later date.

To order memorial trees or send flowers to the family in memory of Shane Hier, please visit our flower store.