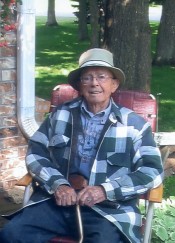 Russel was born October 14, 1908 at Burrton, the son of Claude and Josephine Jones Lawson. He graduated from Burrton High School. He had lived in the Burrton community until moving to the Maple Hill community in 1946.

Mr. Lawson worked at Goodyear Tire and Rubber in Topeka until he retired in 1970. He was a farmer and stockman and raised shorthorn cattle. Russel was a member of the Dover Federated Church and was also a member of the Kansas Shorthorn Cattle Association.

Funeral services will be at 11:00 A.M.Saturday, October 26, 2013 at the DoverFederatedChurch where the family will receive friends from 10:00 A.M. until service time. Interment will be in the DoverCemetery. Memorial contributions may be made to the DoverFederatedChurch and sent in care of Piper Funeral Home, 714 Maple, St. Marys, KS. 66536.
To order memorial trees or send flowers to the family in memory of Russel Lawson, please visit our flower store.