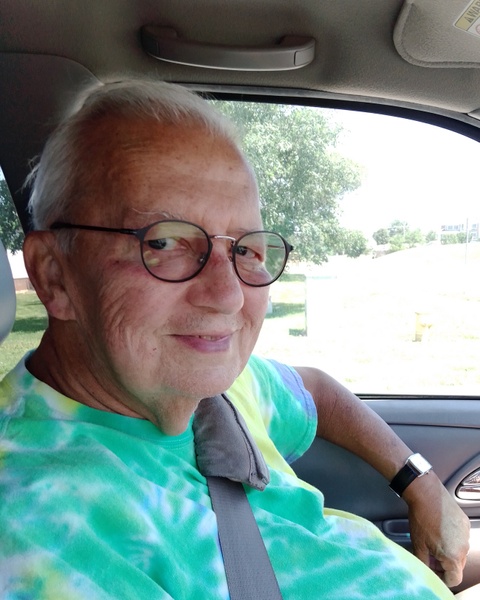 It is with great sadness that we share the passing of our dear Ron. Ron passed away peacefully on October 2, 2022 at his home in Lawrence with his wife by his side from complications of diabetes. He was 76 years old having been born on the 2nd day of August, 1946 in Wamego, KS to Cletus L. and Dorothy P. (Larison) Perry. His mother would say it was the hottest day of the year.  Ron was raised in St. Marys and graduated from St. Marys High School and Kansas State Teachers College (now Emporia State) with a degree in Business Management. He began his banking career at Southern Arizona Bank and Trust, Tucson, AZ and upon moving back to Kansas worked at St. Marys State Bank and Kaw Valley Bank, Topeka.  He worked for Internet Mortgage, Overland Park prior to retiring for health reasons.  He married Peggy Rezac and they later divorced.  On December 23, 2006 he married Carla (Reese) Hoobler and with this marriage gained a daughter.   Ron was a very social guy who Carla often referred to as Mr. Never Met a Stranger.  If you met him he would know everything about you and your life by the end of the conversation.   Ron loved sports but his passion was baseball having played as a kid, in college and later town team men’s softball.  He was fortunate to take many summer baseball trips with friends to visit numerous ball parks.  Ron and Carla made several visits to Arizona for spring training and visited the Baseball Hall of Fame.  He loved good single malt scotch, dirty martinis and scratcher tickets. He was a member of the St. Marys Methodist Church and attended First United Methodist Church, Lawrence where he served as usher. He was a prior board member of Big Brothers/Big Sisters in Topeka and volunteered with Meals on Wheels. Ron had great respect for our military veterans and supported many veteran causes.

Ron is survived by his wife Carla of Lawrence and daughter Sarah (Dale) Nordlund, Valley Falls.  He is also survived by his sister Sheryl Dick, Berryton and his brother Dan (Linda) Perry, Emmett.  Ron was blessed with lots of nieces and nephews all of whom he adored.  Also surviving are brothers-in-law Rick(Mary Ellen) Reese and Ron (LeAnna) Reese.   He was predeceased by his parents, a niece Dana Perry and brother-in-law Gary Dick.

Memorial contributions can be made to the St. Marys Methodist Church or the Lawrence Humane Society and sent in care of Piper Funeral Home, 714 Maple Street, St . Marys, Kansas 66536.  To leave online condolences go to www.piperfuneralhome.com.  He will be loved and missed forever.

To order memorial trees or send flowers to the family in memory of Ronald "Ron" Perry, please visit our flower store.