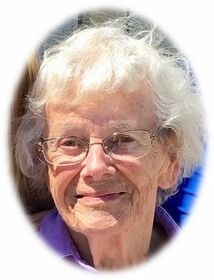 She was born December 5th 1929 in Emmett, Kansas where she lived most of her life until moving to Redbud Plaza Assisted Living, Onaga, KS in 2018.

Roberta was the daughter of Alfred and Emma (Homan) DeVader. A child of the depression era, Roberta told stories of turning on the family’s one Christmas light when a car drove by, and describing the fun she had cooling off in the summer using a tin can with holes punched in it to beat the heat.

Roberta was an intelligent girl, skipping 7th grade.  After graduating from Emmett High School in 1947, and once she turned 18, Roberta rode a train to Union Station in Kansas City to take a job with TWA as a teletype operator. Having met the love of her life, Joe Baumchen, Roberta and Joe were married at Immaculate Conception church in St. Marys on February 27, 1954. They enjoyed 67 years of marriage.

Joe and Roberta moved to the family farm in 1957 where they had a dairy, later switching to hogs, cattle and crops. They raised their eight children on the farm. Roberta was a farmwife, helping Joe with driving trucks and tractors. When Joe bought his first tractor with a cab, he told Roberta she didn’t have to worry about getting her hair dirty!  Being a farmwife included many meals taken to Joe as he worked late in the fields. It also included feeding the family of ten, as well as a hired hand.  Roberta also had a large vegetable garden and many flower beds. She never seemed to sit still as there were always weeds to pull or the next meal to prepare.

With eight children and 20 grandchildren raised in the area, Joe and Roberta’s biggest hobby was attending ballgames. Softball/baseball, basketball, volleyball, football and many other games were attended in St. Marys, Rossville, Baldwin, and even Nashville, TN.  She was a fixture with Joe at St. Marys’ sporting events for 46 years until the last grandson graduated in 2016.  She and Joe also travelled throughout the United States in their retirement.  Roberta is fondly remembered by her grandchildren for the great cookies, cakes, cinnamon rolls, and “cherry pie” she made for them.

Public Visitation will be held Friday, May 14th from 5:00-7:00 at Immaculate Conception Catholic Church followed by a parish rosary at 7:00.

Memorials are suggested for the St. Marys’ Community Food Pantry or to the Redbud Resident Fund and sent in care of Piper Funeral Home, 714 Maple Street, St. Marys, KS 66536

To order memorial trees or send flowers to the family in memory of Roberta Baumchen, please visit our flower store.