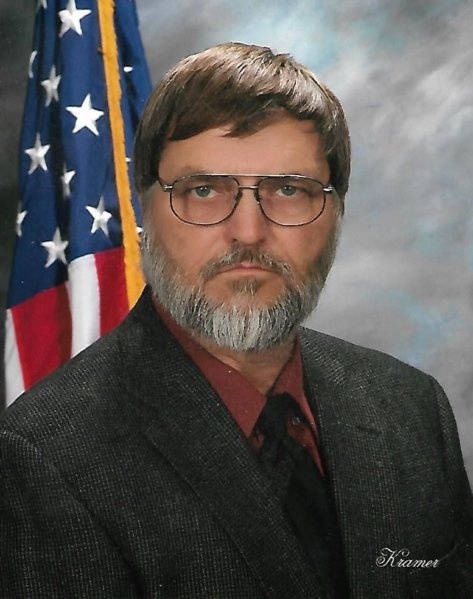 Randy Mark Brown was born October 12, 1950 in Clay Center, Kansas to Carl Eugene and Imateen Knox Brown and entered his eternal rest at home on February 5, 2021 surrounded by family. He attended St. Ann’s Catholic School in Clyde, Kansas through the 8 th grade. He graduated from Clyde High School in 1969 and then attended Beloit Technical School, graduating in 1970 after studying auto mechanics.

He was employed at Skinner Chevrolet in Clay Center until he moved to Topeka in 1970. He was employed by several Chevrolet dealerships prior to beginning employment in 1972 with Sears Automotive where he worked until 1989. He then was employed by Shawnee County, first with Parks and Recreation at Lake Shawnee, then with the Sheriff’s Department until his retirement in 2009 due to disability. He also utilized his skill by serving as an instructor for an evening adult automotive repair course at Kaw Valley Area Vo-Tech.

Randy did not know a stranger; he was always ready to use his mechanical skills to assist numerous persons. Many nights after work you would find him working in his home shop on a vehicle for friends or family or strangers broken down on the highway. If you needed something, you called Randy and he would come to your rescue by providing needed repairs, searching down parts at the salvage yard or auction, or lending a helping hand. He loved to barter and bargain and was proud when he came away with a super good deal.

He looked forward every Christmas to being “Santa” at family gatherings, Christmas parades, for co-workers at Shawnee County Parks and Recreation and other organizations. To his nieces and nephews, he was the uncle they remember teasing them and always making them laugh. Around the table at family gatherings, he was the storyteller with an endless repertoire. It seemed he was always at the right time and place to come away with a great story to be shared.

Another favorite memory was gathering at Randy and Linda’s for a pool party topped off by Randy’s BBQ ribs. This was a favorite way to celebrate family summer birthdays as well as impromptu swims. After Randy and Linda built their new home in 2010, he loved to tell people he “mowed his roof ”to see their reaction and then be able to proudly describe their unique home.

Alaska was his favorite vacation destination after living several months there with his Uncle Freddie and Aunt Mary Brown when he was 12 years old. Trips to Alaska with Linda and the kids, as well as other family members, provided tales of driving the Alcan Highway with vehicles to be sold upon arrival, fishing experiences, and numerous other unique Alaska experiences as he shared his love of this state with family and friends.

After retirement due to disability, he continued his love of “tinkering and fixing” by working on lawnmowers, weed eaters, and chainsaws. Again, finding and bartering for discarded equipment that needed a simple fix to be good as new.

He was a member of the Rossville Methodist Church where, prior to his disability, he enjoyed working with youth and served as a trustee. For several years, he served as a mentor at the Shawnee County Boys Juvenile Detention Center. He loved attending and cheering on his children and grandchildren at all their activities, driving their class floats in the parade and assisting with 4-H projects.

He and Linda were also host parents for a German exchange student, Sara Priessel in 2001. Sara became special to Randy as they developed a bond over their shared birthdays and discussions of various topics. Sara brought a broader view into Randy’s world. He enjoyed his time spent with the entire cohort of exchange students that year, taking them fishing, hosting swim parties and being involved with all the YFU activities.

In lieu of flowers, memorials may be designated to Rossville Methodist Church or Avalon Hospice.

Memorial Services will be held Saturday, February 13 th at 2:00 p.m. at the Rossville Methodist Church for family only. There will be a public visitation at Piper Funeral Home on Friday, the 12th from 4-7 p.m. Live streaming of the service will be available on Piper’s Facebook page. Inurnment will be held at a later date at Riverdale Cemetery in Clifton. Masks and social distancing required.

To order memorial trees or send flowers to the family in memory of Randy Brown, please visit our flower store.