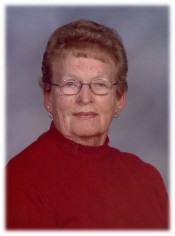 She was born January 30, 1928 at Dover the daughter of Ray & Hazel Long Logan. Phyllis graduated from Dover High School.

Phyllis was a homemaker. She was a member of the Dover Federated Church, the Dover Card Club, the Social Hour Club in Auburn and the Harveyville Senior Citizens.

On May 17, 1947 she was united in marriage to Robert F. Brownlee. He preceded her in death on October 9, 1999. She was also preceded in death by her parents. Phyllis later married Beverly Vilander on October 22, 2007 in Topeka. He survives of the home.

Other survivors include a son, Rodney Brownlee, Harveyville; a daughter Linda (Mike) Vilander, Topeka; three grandchildren and five great-grandchildren along with many other family and friends that will miss her dearly.

Memorial services will be at 11:00 A.M.Monday, August 5, 2013 at the DoverFederatedChurch. Private Inurnment will be at a later date. The family will receive friends from 5:00 until 7:00 P.M.Sunday, August 4, 2013 at the Dover Federated Church Fellowship Hall. In lieu of flowers memorial contributions may be made to the DoverCommunity Center or Helping Hands Humane Society and sent in care of Piper Funeral Home, 714 Maple, St. Marys, Kansas66536.
To order memorial trees or send flowers to the family in memory of Phyllis Brownlee, please visit our flower store.