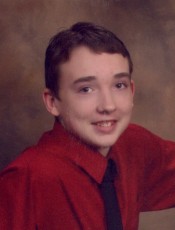 Michael was born in 1999 and raised in Saint Marys. He attended Saint Marys Elementary, Junior High, and High School. He was a Gifted student, and received academic honors many times, including the Presidential Award for Academic Excellence. He was younger than many of his classmates because he had advanced an extra grade in elementary school.

Michael was a member of the school Band and Choir for several years, playing trombone in the band. He was on the Junior High Wrestling and Track teams, and was looking forward to Wrestling and being on the High School Baseball team this coming year. Michael was a Little League baseball player for Saint Marys each year since he was 5 years old.

Michael was a member of Boy Scout Troop 92 in Wamego, and had recently attained Star Scout rank and had completed all requirements for Life Scout Rank. He was working towards attaining his Eagle Scout rank. Michael had been a Webelo of Cub Scout Pack 92 of Wamego, earning his Arrow of Light prior to becoming a Boy Scout.

Michael was an Amateur Radio operator. He attained his Technician and General Class Licenses in 2012. His radio callsign was KD0QOS.

To order memorial trees or send flowers to the family in memory of Michael Kuhn II, please visit our flower store.