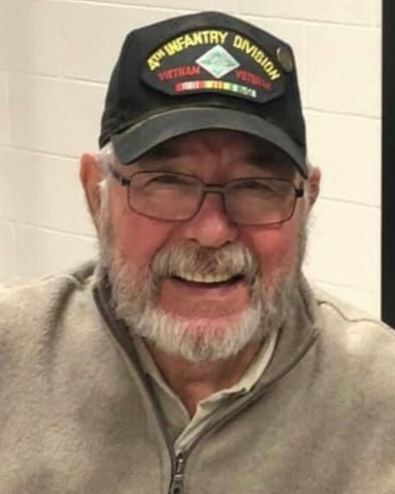 Melvin was born April 17, 1947 in Dover, the son of Austin “Auty” and Luella M. Olson Sage. He lived in the Willard and Rossville communities all of his life and graduated from Rossville High School.

After high school, Melvin began working for the Kansas Gas Service Company where he worked for 45 years, retiring in 2010 as a dispatcher.

On October 14, 1967, Melvin and Loretta Duncan were united in marriage in Topeka.  She survives of their home.

In 1965, he enlisted in the National Guard and was part of the 69th Brigade that was activated in 1968. After training in Colorado Springs, Mel was sent to Vietnam in 1969.

He was preceded in death by his parents and a niece, Yvette Nelson.

Mel never met a stranger and was quick to brag about his grandkids. He loved fishing and the outdoors, K-State football, KU basketball, and the Kansas City Royals. His true love was Loretta and traveling around watching all of the grandkids’ activities.

Memorial contributions may be made to the University of Kansas Cancer Center or to the VFW and sent in care of Piper Funeral Home, 714 Maple Street, St. Marys, Kansas 66536. To leave online condolences, go to www.piperfuneralhome.com.

To order memorial trees or send flowers to the family in memory of Melvin D. Sage, please visit our flower store.