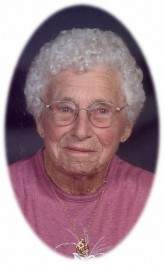 Maude Agnes Dagg, 94, of Harveyville passed away Thursday, November 14, 2013 at Stormont Vail Hospital. She was a life-long resident of the Dover-Harveyville area.

Maude was born on April 24, 1919 at Dover, the daughter of Charles and Agnes Sherrets Kemble.

She was a school cook for many years for Wabaunsee East #330 and Auburn Washburn #437. Maude was a devoted wife, mother, grandmother and friend. She was always willing to help others. She also was a farm wife and helped with the family farm north of Harveyville. She was a member of the Dover Federated Church and a 60 year member of Clarice Chapter Order of the Eastern Star.

She was preceded in death by her parents, her husband, Adam on May 8, 1995, and two brothers, William and Roy (Shorty) Kemble.

Funeral services will be at 11:00 A.M. Monday, November 18, 2013 at the Dover Federated Church. Interment will be in the Dover Cemetery. The family will receive friends at the church on Sunday, November 17, 2013 from 5:00 until 7:00 P.M. In lieu of flowers the family requests memorial contributions be made to the Dover Community Center or the Wabaunsee County Fair Association and sent in care of Piper Funeral Home, 714 Maple St., St. Marys, Kansas 66536. Online condolences may be sent to www.piperfuneralhome.com.

To order memorial trees or send flowers to the family in memory of Maude Dagg, please visit our flower store.