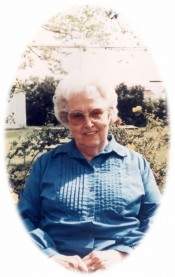 She was born October 23, 1928 at Valley Falls the daughter of Eugene F. and Margaret Bertels Wenzl. She graduated from Immaculate Conception Catholic High School in St. Marys.

Mrs. Homan was a waitress at the Knights of Columbus Club in St. Marys for many years. She was a member of Immaculate Conception Catholic Church.

A memorial Mass of Christian Burial will be at 10:00 A.M.Friday, January 10, 2014 at Immaculate Conception Catholic Church in St. Marys. Inurnment will be in Mt.CalvaryCemetery, St. Marys. A rosary will be recited at 6:00 P.M.Thursday, January 9, 2014 followed by a visitation until 8:00 P.M. at the funeral home. Memorial contributions may be made to the Midland Hospice and sent to Piper Funeral Home, 714 Maple St, St. Marys, Kansas66536. Online condolences may be sent to www.piperfuneralho
To order memorial trees or send flowers to the family in memory of Mary Homan, please visit our flower store.