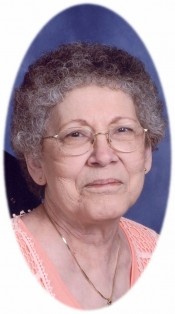 Rossville-Mary C. Cowan, 69, passed away peacefully with her family by her side at the Midland Hospice House on March 11, 2014, after a long, hard fought battle with COPD.

Mary was born in Rossville on December 25, 1944, to Edward and Winifred Yocum Besta. She grew up in the Rossville/Delia area and graduated from Delia High School in 1962.

After staying at home to raise her children, she went to work as a special needs paraprofessional for USD # 321 and retired after 20 years of service. She was an active member of St. Stanislaus Catholic Church in Rossville.

Mary enjoyed being active and loved playing softball in her younger years. She enjoyed going fishing with her husband, gardening, sewing, and refinishing antique furniture. There wasn't much she couldn't catch, grow, make or make look new and she was an amazing cook. She would have much rather gone outside to play a game of catch than go shopping any day and for this reason she was the perfect mother for 5 boys. She was extremely patient and had a calming presence about her, a trait that would draw people of all ages to her. Her family was her life and she did not miss any of her son's events as they grew up. She continued to attend many of her grandchildren's events as long as she could. Her grandchildren and great-grandchildren brought her tremendous joy and were the bright spots on even her darkest days.

Mary was preceded in death by her parents, her step-father, Clinton Kerwin, a brother, Eddie Besta and a sister, Teresa Marney.

On October 5, 1963 she was united in marriage to Ron Cowan at Sacred Heart Church in Delia. They enjoyed 50 years together. Ron survives of the home.

Mass of Christian Burial will be celebrated at 10:00 A.M. Saturday, March 15, 2014 at St. Stanislaus Catholic Church in Rossville. Interment will be in the Rossville Cemetery. There will be a Rosary recited at 6:00 P.M. Friday at the church followed by a visitation until 8:00 P.M. Memorial contributions may be made to St. Stanislaus Catholic Church or Midland Hospice House and sent in care of Piper Funeral Home, 714 Maple, St. Marys, Kansas 66536. Online condolences may be sent to www.piperfuneralhome.com.

To order memorial trees or send flowers to the family in memory of Mary Cowan, please visit our flower store.