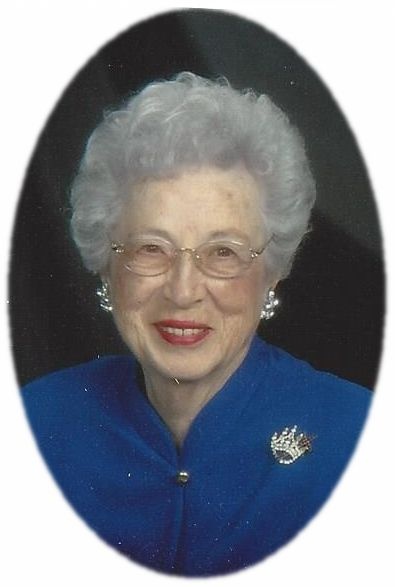 Marjorie Pearl Guerich, 91, of St. Marys, died March 23 after an extended illness. "Marj" passed away peacefully at the St. Marys Manor surrounded by family members. Born November 1, 1922, on a farm in Sandy Hook, near Rossville, Marj was the eldest of six children of Thomas M. and Florence G. Doyle Pearl. She attended James Grade School in rural Shawnee County and was a graduate of Immaculate Conception Catholic High School in 1940. She studied in East Chicago, Illinois, and St. Louis to become a nationally registered radiologic technologist. She worked at Topeka State Hospital for 27 years before retiring in 1987. Marj was a longtime member of Immaculate Conception Catholic Church, the Daughters of Isabella Little Flower Circle, Kansans for Life, the Kansas Authors Club, the Wamego Writers Roundtable, Kevin Club, Kansas Historical Society, Kansas Association of Public Employees and the American Legion Auxiliary. She wrote stories about her life as a hobby and was active as a community hospice volunteer. She also was a frequent visitor of the residents at the St. Marys Manor. An energetic traveler who toured a variety of national and international venues over the years, Marj was an excellent cook who loved to entertain relatives and friends at special dinners and holiday celebrations in her home. As an elder of the Citizen Potawatomi Nation, Marj was extremely proud of her Native American heritage. During the Jesuit-Potawatomi Days in October 1998, she oversaw the preparations for St. Marys' celebration of the 150th anniversary of the local Jesuit mission's founding. A devout Roman Catholic, she was an avid supporter of the Society of Jesus (Jesuits). Her children, Ann Marie (Al) Dobson, of Manhattan, and Clement Joseph "C.J.". Guerich of Lawrence survive. Marj was the proud grandmother of Amy Marie Guerich, Overland Park, Sarah, Michael and Adam Guerich, all of Lawrence and Jenn Higgins and Marcus Dobson of Manhattan. Her great- grandchildren are Jordan Minor and Gavin and Arianna Higgins.. Also surviving are siblings, Robert L. Pearl, of Parma Heights, Ohio; Maureen Harris of Topeka; Sister Virginia Pearl, CSJ, of Concordia, and Gerald (Hildegard) Pearl of rural St. Marys. Marj was preceded in death by her parents and her brother, James B. "J.B." Pearl of St. Marys. In addition, she is survived by sister-in-law Dorothy Eileen Pearl, St. Marys, and many nieces, nephews and cousins. Mass of Christian Burial will be celebrated at 10:00 AM Thursday, March 27, 2014 at Immaculate Conception Catholic Church in St. Marys. Interment will be in Mt. Calvary Cemetery, St. Marys. Marj will lie in state after 3:00 P.M. Wednesday, March 26, 2014 at Piper Funeral Home, St. Marys,where the Daughters of Isabella Little Flower Circle will recite a rosary at 4:00 P.M. The family will receive friends from 6:00 until the Prayer Vigil at 7:30 PM. Memorial contributions may be made to Immaculate Conception Catholic Church or Grace Hospice and sent in care of Piper Funeral Home, 714 Maple, St. Marys, Kansas 66536.

To order memorial trees or send flowers to the family in memory of Marjorie Guerich, please visit our flower store.