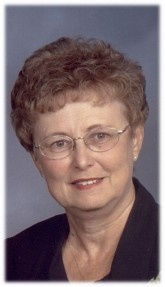 She was born July 5, 1942 at Topeka, the daughter of Francis and Gwendolyn Perry Zemek. Marikay grew up in St. Marys and graduated from St. Marys High School in 1960.

Marikay worked at the 1st National Bank in Topeka from 1960 until 1965 and later was the bookkeeper for Fox Ceramic Tile, Fox Self Storage and Fox Rentals all in St. Marys. What Marikay enjoyed most were family outings at the cabin, and having all of her children and grandchildren around her. She especially enjoyed attending her children and grandchildren's activities. She was an active member of Immaculate Conception Catholic Church and had a holy adoration hour at the Adoration Chapel from the start of the program. She was a member and past president of the Booster Club for many years. She helped establish the St. Marys Kids Wrestling Program.

On August 24, 1963 she was united in marriage to Jerry Fox in St. Marys. They celebrated their 50th wedding anniversary this year. Jerry survives of the home.

Mass of Christian Burial will be celebrated at 10:00 A.M. Tuesday, November 19, 2013 at Immaculate Conception Catholic Church in St. Marys. Interment will be in Mt. Calvary Cemetery, St. Marys. Mrs. Fox will lie in state after 5:00 P.M. Monday at Immaculate Conception Catholic Church where the family will receive friends and a rosary will be recited at 6:30 P.M.. Memorial contributions may be made to the Marikay Fox Memorial Fund and sent in care of Piper Funeral Home, 714 Maple St, St. Marys, KS. 66536.

To order memorial trees or send flowers to the family in memory of Marikay Fox, please visit our flower store.