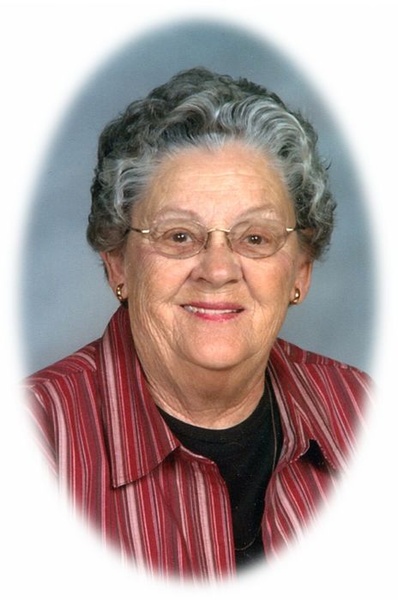 Dover—Margery E. Blythe, 86, passed away Sunday, November 3, 2019 at the Alma Manor with family by her side.

She was born April 28, 1933 on the family farm near Dover, the youngest triplet daughter of Thomas R. and Edith V. Moran Logan.  Margery graduated from Dover High School in 1951.  She attended Clark’s School of Business in Topeka. Margery had lived in the Dover community nearly all of her life.

Margery worked for Santa Fe Railroad after attending Clark’s School of Business until the birth of her first child, at which time she stayed home to help with the farm and raise her family.  She worked with her husband Gail on the farm as an anhydrous dealer for the Farmers Union COOP out of St. Marys.  Margery was active in the Dover Heritage Days for many years and helping with the Dover 4H, as her children were members.  She was a former member of: Dover FCE, Dover Order of Eastern Star and Dover Silver Tea Club.  She also had previously served on the Maple Hill Township board and was a member of the Dover Federated Church.  During her retirement years, Margery was an avid sports fan and enjoyed attending the many sporting events of her grandchildren.

On February 12, 1955 she was united in marriage to William “Gail” Blythe.  He preceded her in death on April 20, 2007.  She was also preceded in death by her parents, brothers, Martin, Elden Dale, Marion, Charles Duane and triplet sister, Mary.

Funeral services will be at 10:00 A.M. Friday, November 8, 2019 at the Dover Federated Church.  Interment will be in the Dover Cemetery.  Mrs. Blythe will lie in state and the family will receive friends from 6:00 until 8:00 P.M. Thursday, November 7, 2019 at the Dover Federated Church.  Memorial Contributions may be made to the Wabaunsee or Shawnee County 4H or the Dover Community Foundation Scholarship fund and sent in care of Piper Funeral Home, 714 Maple Street, St. Marys, Kansas 66536.  To leave online condolences go to www.piperfuneralhome.com

To order memorial trees or send flowers to the family in memory of Margery Blythe, please visit our flower store.