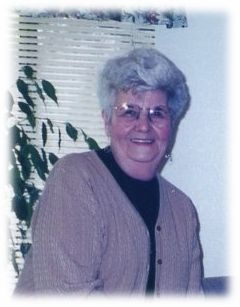 Lake Wabaunsee-Marcial A. Lambert, 89, passed away Sunday, July 1, 2018 at a Topeka hospital. She was born June 7, 1929 at Tecumseh the daughter of Isaac S. and Jessie L. Melton Robinson. Marcial graduated from Seaman High School and attended Clark's Business School. She had lived in the Rossville and Delia communities before moving to Lake Wabaunsee. Marcial worked for Kaw Valley USD No. 321 many years as the treasurer retiring in 1990. She was a member of the Rossville United Methodist Church and had attended the Eskridge United Church and Redeemer Evangelical Lutheran Church at the lake. On June 30, 1948 she was united in marriage to Elmer W. Lambert. He preceded her in death on November 18, 2002. A son, Terry W. Lambert died September 17, 1989. Marcial was also preceded in death by siblings, Iona, Lois, Doris, Elizabeth, Malcolm, Loren and Bill. Survivors include her daughter, Cindy (Richard) Langworthy, Lake Wabaunsee; a sister, Ina Patterson, Topeka; five grandchildren and three great-grandchildren. Funeral services will be at 10:00 A.M. Tuesday, July 10, 2018 at the Rossville United Methodist Church. Interment will be in the Rossville Cemetery. Mrs. Lambert will lie in state on Monday, July 9, 2018 at the church where the family will receive friends from 6:00 until 8:00 P.M. Memorial contributions may be made to the Rossville United Methodist Church or the Eskridge Senior Center and sent in care of Piper Funeral Home, 714 Maple Street, St. Marys, Kansas 66536. To leave online condolences please go to www.piperfuneralhome.com

To order memorial trees or send flowers to the family in memory of Marcial Lambert, please visit our flower store.