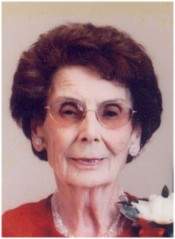 She was born June 21, 1923 at Axtell, the daughter of Peter J. and Mary F. Montgomery Eagan. She grew up in the Axtell vicinity and lived there until she and Albert J. Fox where united in marriage by Monsignor George Kugelmeier on July 17, 1943 at St. Michaels Catholic Church.

After their marriage Lucile and Al moved to Washington D.C. where Sgt. Fox was stationed at that time. Following the end of the war (1945) they moved to St. Marys where she lived until her death. Lucile was a devoted wife, mother and homemaker. She was employed by USD No. 321 for several years. Mrs. Fox was a member of Immaculate Conception Catholic Church in St. Marys and was a sacristan at the church. She was a Lay Minister and volunteer at the St. Marys Manor for over 40 years. Lucile had also served on the election board for several years.

Mass of Christian Burial will be celebrated at 10:00 A.M Tuesday, July 30, 2013 at Immaculate Conception Catholic Church. Interment will follow in Mt. Calvary Cemetery. Mrs. Fox will lie in state after 2:00 P.M. Monday, July 29, 2013 at the church where the family will receive friends from 6:00 until the rosary at 7:00. In lieu of flowers memorial contributions may be made to the Lucile P. Fox Memorial Fund and sent in care of Piper Funeral Home, St. Marys.

To order memorial trees or send flowers to the family in memory of Lucile Fox, please visit our flower store.