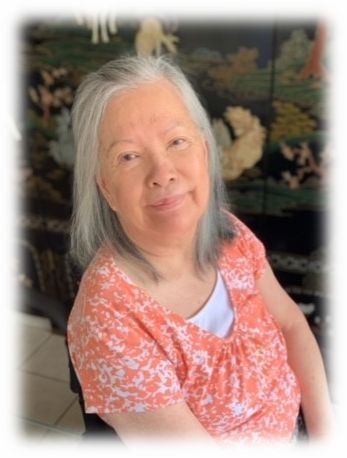 Lieu Alvarez was born on 12 January, 1943 in Phan Thiet, Viet Nam. She was the second of 12 children. She was raised a Buddhist though the family had contact with the French colonialists and as an extension, the Catholic Faith though only peripherally. Yet the family respected the foreign occupiers and emulated them in business though not in faith. As a young woman, Lieu became a school teacher, teaching mathematics at a secondary level but then decided to become an English translator as the Americans were beginning to replace the French in Viet Nam. She was hosted at a hospital in Bingham, New York to learn to translate English for doctors and nurses and where she met her future husband, Johnny Alvarez, who was a young surgical resident. Enamored by her, Dr. Alvarez volunteered to become part of the State Department outreach to the country of Viet Nam and joined Lieu when she returned to her country. They married, with Lieu converting to Catholicism for her husband, and they lived for 4 years embedded in the Vietnamese countryside during the height of the Vietnamese War where they worked together as a team with both the State Department and Special Forces assets of the United States. Despite the worsening chaos and turmoil, they had one daughter, Antoinette, who was baptized by French nuns. The country rapidly collapsed and both Lieu and her daughter had to be rescued from a beach by helicopter gunships as the North Vietnamese swept across the rural countryside. The trio soon had to leave the country during its final days since both Lieu and her husband had a price on their heads as foreign collaborators. Though she thought she would never see her family again, because of her husband’s State Department contacts, the majority of her family was able to be re-located to the United States soon afterwards. Due to his experience with the U.S. Military during his State Department tenure, Johnny Alvarez joined the U.S. Army and was commissioned as an officer in the Medical Corps. As a result, Lieu joined the thousands of military spouses who followed their husbands across the world from Okinawa to Germany as well as numerous deployments to include Desert Shield. After his retirement from the military, Lieu was able to open up her own business with a boutique shop in San Antonio, Texas where she was able to demonstrate her flair for life and generosity to others. Yet she was missing something that she didn’t quite understand. Though she converted to Catholicism, she clung to Buddhism which she had grown up with so Buddha was beside a Crucifix for most of her life. This became an issue with her children and grandchildren who were Catholic and a point of controversy and conflict within the family. Things seemed to be at an impasse until a terrible yet wonderful event occurred that would define the rest of her life.

In 2010, she was diagnosed with brain cancer. Several nights prior to her surgery, Lieu saw dark figures at the foot of her bed and became very afraid of her impending surgery. It was a long operation and when word was sent out that the tumor was removed, her adult children left to take care of their younger children. Her oldest grandson who was only 10 years old at the time stayed back with his grandfather. News then came out of the OR that the surgeons had gotten into massive bleeding and was having problems controlling it. Lieu’s husband and grandson waited in suspense but another update stated there was no progress in controlling the bleeding and to prepare for the worst. They then began to pray the Rosary vocally in the waiting room. Another general surgeon colleague, who was not Catholic, began to pray with them. As they finished the Rosary, word came out that the bleeding was stopped though she was in shock. Lieu was then in a coma for 3 days after surgery. When she finally did awaken, she was completely paralyzed on her right side. She was able to speak however. She then described an apparition of "the most beautiful woman in the world" who stayed with her those 3 days of coma, praying for her, after which she left in a blinding light as she awoke from her coma. When a picture of the Blessed Virgin Mary was brought to her, she exclaimed that she was the woman who had been with her during those days after her surgery!

Lieu had a long complicated hospitalization but eventually went to a rehab facility for several months prior to returning to home. But when she was wheel-chaired through the front door of her house, she immediately ordered that all of the Buddhas were to be removed from the home. Only the Crucifix was to remain! Our Lady was victorious! Since then, her husband lovingly cared for her at home despite her increasing weakness and the eventual return of the cancer the year prior to her death. Despite the large cross she had to bear, Lieu resigned herself to her debilitated state of a paralytic, praying the Rosary. Yet she was provided the opportunity to be purged of many of the attachments of her past life as well as prepare for a new beginning in eternity.

To order memorial trees or send flowers to the family in memory of Lieu Alvarez, please visit our flower store.