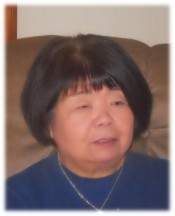 She was born July 31, 1943 at Sasebo, Japan, the daughter of Tatsuji and Shitshu Ishida. Kay grew up in Japan and graduated from high school there. She was a daycare provider in her home at Eskridge for many years.

Funeral services will be at 11:00 A.M. Friday, December 13, 2013 at the Dover Federated Church. Interment will be in the Dover Cemetery. Mrs. Ginter will lie in state from 6:00 until 7:30 Thursday, December 12, 2013 at Piper Funeral Chapel of Eskridge, 201 E 2nd Ave. Memorial contributions may be made to Mazie's Pool and sent in care of Piper Funeral Chapel, P.O. Box 1, Eskridge, Kansas 66423. Online condolences may be sent to www.piperfuneralhome.com.

To order memorial trees or send flowers to the family in memory of Katsuyo Ginter, please visit our flower store.