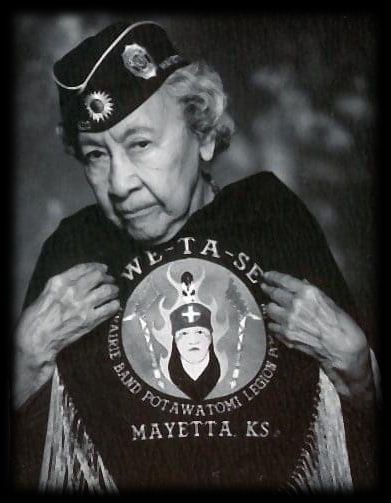 Julia Y. Kabance, of St. Mary’s, KS, received her last rites and died peacefully in her sleep on November 16, 2021, at the age of 111. She was the oldest living member of the Prairie Band Potawatomi Nation, a great source of pride for her. She was also the oldest known female US veteran, having served in both the Army and the Air Force.

Julia was born on August 10, 1910, on the Prairie Band Potawatomi Reservation. She was the 11th of 12 children born to Frank and Mary Kabance. She grew up helping her parents on their farm and first left home to attend Haskell Institute (now Haskell Indian Nations University). In 1943, she joined the US Army as a member of the Women’s Army Corps and served in World War II.  Julia was a member of We-ta-se American Legion.

After her retirement, Julia served extensively as a volunteer for the VA and the Catholic Church, including a long tenure at the Topeka Veterans Affairs Medical Center. Her faith and volunteer work were most important to her, and she continued volunteering well past her 100th birthday.

Julia is survived by her nephews Galen and Maurice (Carolyn) Kabance and her niece-in-law Betty Kabance (LaRue). She is also survived by dozens of great, great-great, and great-great-great nieces and nephews around the country.

To order memorial trees or send flowers to the family in memory of Julia Kabance, please visit our flower store.