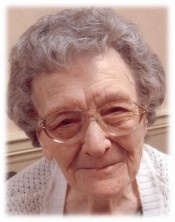 Josephine Pressgrove, 100, passed away Tuesday, May 28, 2013 at the Rossville Healthcare and Rehabilitation Center in Rossville.

She was born December 28, 1912 to George and Rosie Hejtmanek Olejnik of Rossville. She spent most of her life in the Rossville, Wamego and Topeka areas and attended Victor 101 School.

Josephine was married to LeRoy Pressgrove on January 31, 1935. They were married for 57 years. He preceded her in death on November 12, 1992. She was recently preceded in death by two of her three children, Karen Figge and Ronald Pressgrove. Four siblings also preceded her in death; brothers, George, Rudy, Henry and Ed Olejnik. Also, preceding her in death are a son-in-law, Jake Rosser; one grandchild, Timothy Rosser and one great-great-grandson Anthony Rosser.

Josephine was a homemaker and loved cooking, gardening, crocheting and sewing. She was noted for her delicious Kolaches and always had her Seek-A-Word close at hand. She graduated from the Menniger Bible Study and was a member of the Rossville United Methodist Church. She was a life member of the ZCBJ Lodge.

Graveside services will be at 10:00 A.M. Friday, May 31, 2013 at the Czech Moravian Cemetery, Rossville. Mrs. Pressgrove will lie in state and the family will receive friends from 6:00 until 7:30 P.M. Thursday, May 30, 2013 at Piper Funeral Home in St. Marys. There will be a prayer service at 7:30 Thursday evening at the funeral home. Memorial contributions may be given to the ZCBJ Lodge and sent in care of Piper Funeral Home, 714 Maple, St. Marys, KS. 66536. Online condolences may be sent to www.piperfuneralhome.com.

To order memorial trees or send flowers to the family in memory of Josephine Pressgrove, please visit our flower store.