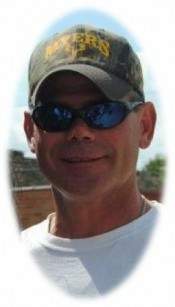 He was born April 21, 1967 at Denver, the son of William G. and JoAnn Hyman Caraway. He grew up in the Delia community and graduated from Rossville High School in 1985.

Joe had lived in Topeka before moving to the Tipton community several years ago. He was employed by Farmway COOP.

On March 8, 1986 he was united in marriage to Cheryl Lundin at Rossville. They later divorced.

Joe was preceded in death by his father William G. Caraway; an infant daughter, Kayla; his dad, John Nitsch and a sister Kim Kriepe.

Funeral services will be at 11:00 A.M. Saturday, January 11, 2014 at Piper Funeral Home in St. Marys. The family will receive friends on Saturday from 9:00 A.M. until service time. Interment will be in the Delia Cemetery. Memorial Contributions may be made in Joe's name and sent in care of the funeral home. Online condolences may be sent to www.piperfuneralhome.com.

To order memorial trees or send flowers to the family in memory of Joseph Caraway, please visit our flower store.