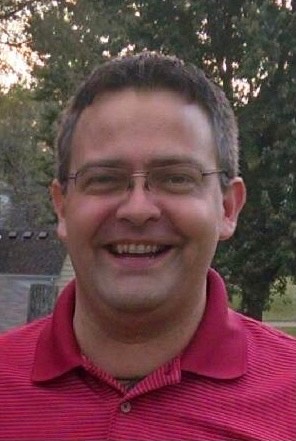 Patrick was born to Kevin and Carol Ekman Werick in Topeka, on August 18, 1983.  He graduated from St. Marys Academy in 2001.  After years of travel and doing odd-jobs here and there, he studied at Kansas State University, Manhattan, and earned a BS in 2009, with a major in journalism and a minor in creative writing.

Patrick was the Vice President and Director of Marketing for Roll Products in St. Marys.  He was a member of Assumption Chapel.

In February of 2011, Patrick and Amanda Perry were united in marriage at Assumption Chapel in St. Marys.  He was a doting husband and father, and his wife and children were the love of his life.  She survives of the home.

These are the brief but full facts of Patrick.  But more should be said, for he had what the French call joie de vivre—the joy of living.  His warmth, cheer, humor, wit, and his honest mischief were his constant companies.  Hardly anyone who met him could not help but become caught in his infectious merriment.  The people of St. Marys saw this nearly daily with him, cruising about town on his electric scooter, goggled and grinning, and the tune “The Ride of Valkyrie” blaring from his speakers.

But others around the United States and the world tasted some of Patrick’s joy.  He was a traveler from his very early days of adulthood.  After graduation, he and a friend, Robert Campbell, cycled across the United States and Canada.  This journey and others, to Ireland and elsewhere, brought Patrick and his memorable character in touch with so many souls, not only with people he stayed with, but also people he met on the streets of Cork, Topeka, and everywhere in between.

Patrick’s Magnum Opus, however, was his music, and more importantly his “Grand Celtic Music Tour.”  He and a handful of friends played Irish tunes at manors, festivals, theatres, homes, and even in the Kansas Capital—wherever there was an ear that wanted to hear and a voice that wanted to share in the music, Patrick was there.  His list of instruments—all self-taught—is an eclectic mix: the tin whistle, the Scottish bagpipes, the Uillean pipes, the didgeridoo, the bombard, the cow bell, the ugly stick, and tapping shoes, to name a few.  And the oddity, Patrick had never learned to read sheet music in his twenty years of playing.

While music and merriment were ever in his heart, his family was his soul.  His love for his wife was immense, and spilled over to their children.  Family vacations, which took them across the U.S. and Canada, were filled with tender memories.  In his own home, this found its way into one of his favorite joys, enjoying beverages at the basement bar with his children.  Patrick often came home with a bottle of ginger beer and he poured it out in tumblers for him and his children while listening to Irish pub music, and they would raise their glasses until bedtime.

In 2016 Patrick developed a great devotion to Saints Cosmas and Damian.  He had contracted a sickness that had brought him to death’s door, but through the intercession of these doctor saints, he returned to health.  To honor them, he built a special shrine in his home, and annually on their feastday, would open his house to anyone who also wanted to pay tribute to his saintly friends.

To order memorial trees or send flowers to the family in memory of Jerome Werick, please visit our flower store.