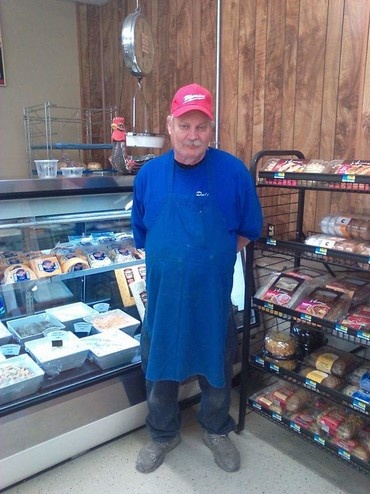 He was born October 26, 1950 at Topeka, the son of Charles Richard and Iryllis Dee Gronquist Puff.  Jim grew up in the Oakland community and graduated from Highland Park High School in 1968.  He served in the National Guard.

Jim was a meat cutter by trade working in many Topeka grocery stores.  In 1986 he and his wife Patti moved to Maple Hill when they bought Barrett’s Grocery Store.  They added Puffy’s Steak and Ice House in 1994 selling the business in 2017.  Jim was a member of the catholic faith.  He had belonged to the Local Meat Cutters Union in Topeka.

He was preceded in death by his parents; a brother David Puff, two brothers-in-law, Dennis Schimmel and Doug Menke.

On January 22, 1972 Jim and Patricia M. Menke were united in marriage at Topeka.  She survives of the home.

A rosary will be recited at 1:30 P.M. Sunday September 22, 2019 followed by a visitation until 4:00 P.M. at Piper Funeral Home in St. Marys. Inurnment will be at 11:00 A.M. Monday, September 23, 2019 in the Maple Hill Cemetery, Maple Hill.  Memorial contributions may be made to Midland Hospice and sent in care of Piper Funeral Home, 714 Maple Street, St. Marys, Kansas 66536.  To leave online condolences go to www.piperfuneralhome.com.

To order memorial trees or send flowers to the family in memory of James "Jim" Puff, please visit our flower store.