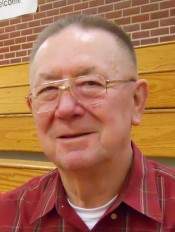 He was born February 23, 1935, at St. Marys, the son of Lawrence N. and Cecilia M. Schumaker. He grew up in St. Marys and graduated from St. Marys High School in 1953. He served in the U. S. Army at Ft. Hood, Texas. He lived in Topeka, briefly, until he moved his family to St. Marys in 1965. Jim operated a dump truck, worked for Dupont and then owned and operated Schumaker Plumbing for many years before working in maintenance at Kansas Neurological Institute for 10 years. During retirement, he and Dee enjoyed delivering busses all over the U.S. Jim enjoyed fishing and treating all children to tractor rides.

Jim was a member of Immaculate Conception Catholic Church in St. Marys and the Knights of Columbus.

Mass of Christian Burial will be at 10:00 a.m. Monday, May 6, 2013, at Immaculate Conception Catholic Church, St. Marys. Mr. Schumaker will lie in state on Sunday, May 5, 2013, at Piper Funeral Home after 2:00 until 7:00 p.m. where the family will receive friends after 6:00 p.m. and there will be a Vigil Service followed by a rosary at 7:00 p.m. Interment will be in Mt. Calvary Cemetery, St. Marys. Memorial contributions may be given to the Immaculate Conception Catholic Church or to Alzheimer's disease and Related Disorders Association to be used for research and sent in care of Piper Funeral Home, 714 Maple, St. Marys, Kansas 66536. Online condolences may be sent to www.piperfuneralhome.com.

To order memorial trees or send flowers to the family in memory of James Schumaker, please visit our flower store.