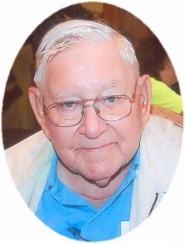 St. Marys-James W. Piper, 84, died Monday, September 28, 2015 at the St. Marys Manor. He was born September 28, 1931 at Williamsburg, the son of Glenn H. and Lena R. Kennard Piper. Jim graduated from Carbondale Rural High School in 1949. He had worked for Santa Fe Railroad in Topeka and the Kansas Fish and Game. He was the Undersheriff of Osage County for several years. Jim was a loan officer for Peoples National Bank in Ottawa and later was the president of First State Bank in Pleasanton. After retiring from the banking business he moved back to Osage county and was active in his computer business. He had lived in St. Marys the past seven years. On March 11, 1950 he was united in marriage to Emily Idell Remington. She died April 23, 1977. He was also preceded in death by his parents and two brothers, Russell and Allen Piper; a daughter-in-law, Linda Piper. Survivors include three sons, Doug (Karen) Piper, Waverly, Mike (Jami) Piper, St. Marys and Terry (Jeannie) Piper, Scranton; 8 grandchildren; 6 great-grandchildren and his neighbor and friend Charlotte Kling. Funeral services will be at 10:30 A.M. Saturday, October 3, 2015 at Piper Funeral Home in St. Marys. The family will receive friends from 9:00 A.M. until service time. Interment will be in the Lyndon Cemetery. Memorial contributions may be made to the St Marys Manor Bus Fund and sent in care of Piper Funeral Home, 714 Maple St., St. Marys, Kansas 66536.

To order memorial trees or send flowers to the family in memory of James Piper, please visit our flower store.