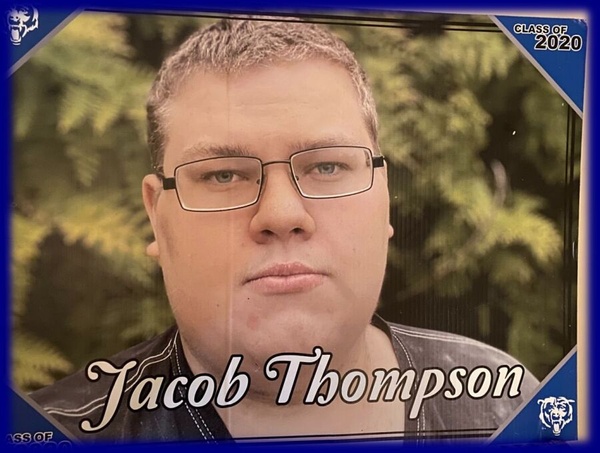 Jacob was born September 13, 2001, at Ft. Riley, Kansas the son of Christopher and Annette Engell Thompson.  Jacob grew up in the St. Marys community and graduated from St. Marys High School in 2020.

Jacob was a loving son to his mother. He called her mommy for the longest time until he changed it to mostly “The Mom.” After the divorce in 2010 Jacob took his role of “Man of the House” very seriously. He was strong and the protector. His hugs were tight and left his mom and sisters feeling loved and safe.

He filled the home with constant noise and energy. He was an amazing guitar player and basically taught himself by ear. Sometimes he’d play the keyboard and guitar at the same time back and forth. Even though sometimes the noise was too much for his mom and sisters, especially Grace, they’d do anything to hear it once again. They also will miss his constant whistling and funny outbursts like “wack” “yeet” “boingus” “hmm” and “interesting”.

He had many friends locally and numerous friends out of state that he formed close relationships with playing games online. After his passing many of these friends contacted his mom and told her what he meant to them and the personal moments that touched and changed their lives forever.

His final day on this Earth was a happy one. He worked at his home captioning job, ate his favorite Chinese food prepared by his sisters, goofed around with them, played online and talked with his friends. His mom will never forget the hug he gave her that day in the garage after stringing the weed eater. She asked him “How is everything?” He hugged her tight and replied “It’s all good now.”

Keep whistling Jacob. We will see you soon.

Jacob was a caption Agent and had worked at Short Stop.  He was a member of Assumption Chapel.

To order memorial trees or send flowers to the family in memory of Jacob Thompson, please visit our flower store.