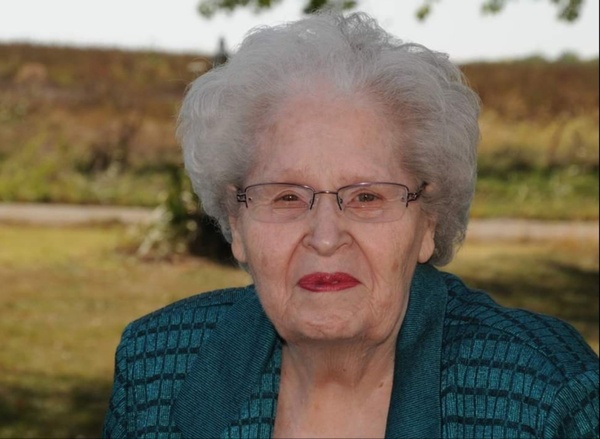 Delia—Ivaleu A. Miller a lifelong member of the Delia community passed away Friday, October 25, 2019 with her loving family by her side. Until recently, she remained in her own home with the loving assistance and care provided by her granddaughter Ashlee.

Ivaleu was born January 1, 1927 at Delia, the first child of Emery and Bertha Eakin.  She grew up in rural Delia along with her sister Eudora and brother, Edward.  She became skilled at farm life on her parent’s farm and later as a partner in her husband, Donald’s farming business.

Ivaleu attended grade school in rural Delia and graduated from Delia High School.  She attended Emporia College where she obtained her teaching certificate.  She taught school for two years at High Prairie Grade School and Stony Point Grade School.  Later in life she worked part-time at the Delia Post Office.

Family and farm were the way of life for Ivaleu, but she had also given of herself to her church and community; serving as an elder of the Delia Presbyterian Church, being a 4-H leader, serving on the election board, and  as a member of the United Presbyterian Women.

Ivaleu had a passion for cooking, a gift from her was sure to include one of her baked goods or candies.  She enjoyed scrapbooking, embroidering, bird watching and especially enjoyed e-mailing her friends.

On June 5, 1946 she was united in marriage to Donald W. “Don” Miller at Holton.  He preceded her in death on October 3, 2005.  Ivaleu was also preceded in death by her parents and her brother, Edward Eakin.

Funeral services will be at 11:00 A.M. Saturday, November 9, 2019 at the Delia Presbyterian Church.  Interment will be in the Delia Cemetery.  Ivaleu will lie in state and the family will receive friends Friday, November 8th from 6:00 until 8:00 P.M. at Piper Funeral Home in St. Marys.  Memorial contributions may be made to the Delia Presbyterian Church and sent in care of Piper Funeral Home, 714 Maple Street, St. Marys, Kansas 66536.

To order memorial trees or send flowers to the family in memory of Ivaleu Miller, please visit our flower store.