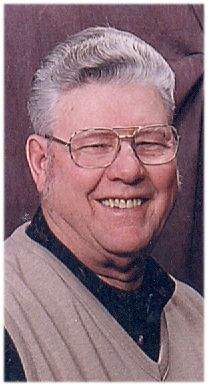 He was born December 22, 1935 at Marshfield, MO; the son of Hiram and Minnie Adams Lee. He grew up in the Ozarks and moved to Wichita at the age of 16 and started working for the railroad. Herman served in the Army National Guard.

Herman moved to Topeka in the early 60's and worked for Santa Fe Railroad for 45 years as a carman welder before retiring. He was a past member of the Lions Club. He was a member of AARP, TCIU Union and the National Association of Retired & Veteran Railroad Employees, Inc. Herman attended coffee at McDonalds and daily at Wehner's in Rossville. He loved his wife, children and grandchildren dearly. Herman was an avid sports fan.

He was preceded in death by his parents, sisters, Gertrude George and Reba Branstetter; and his daughter, Julie Ann Luman.

On February 11, 1962 he was united in marriage to Ilah "Marie" Hoobler Luman in Wichita, she survives of the home.

Funeral Services will be at 10:00 A.M. Thursday, January 16, 2014 at Piper Funeral Home in St. Marys. Interment will be in the Rossville Cemetery. Mr. Lee will lie in state after 2:00 P.M. Wednesday at the funeral home where family will receive friends from 6:00 until 8:00 P.M. In lieu of flowers memorial contributions may be made to the St. Jude's Children's ResearchHospital and sent in care of Piper Funeral Home, 714 Maple St, St. Marys, Kansas66536.

To order memorial trees or send flowers to the family in memory of Herman Lee, please visit our flower store.