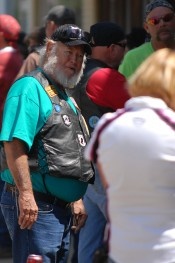 He was born March 26, 1941 at Wichita, the son of Harry M. and Estyl M. Hall Hammer. Harry graduated from Washburn Rural High School in 1959.

Mr. Hammer was in law-enforcement working for the Kansas Highway Patrol Capital Police and for the city of Rossville as Chief of Police for many years before he retired. He was a member of the Rossville Christian Church and was an active member of the Legion Riders at Jimmie Lillard Post No. 31 in Rossville. Harry was a member of the Masonic Lodge in Topeka.

He was married to Shirley Goodwin on October 17, 1965 at Perry. She survives of the home.

Funeral services will be at 10:00 A.M.Thursday, February 13, 2014 at Piper Funeral Home in St. Marys. Interment will be in the RossvilleCemetery. Mr. Hammer will lie in state and the family will receive friends from 6:00 until 8:00 P.M.Wednesday, February 12, 2014 at the funeral home. Memorial contributions may be made to the Harry M. Hammer Memorial Fund and sent in care of Rossville State Bank, Rossville, Kansas 66533.
To order memorial trees or send flowers to the family in memory of Harry Hammer Jr, please visit our flower store.