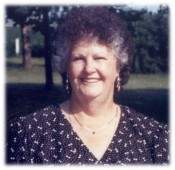 She was born November 22, 1936 at Perry the daughter of Clarence Isaiah and Pearl Opal Best Dick. She grew up in the Rossville community and graduated from Rossville High School.

Mrs. Miller helped on the family farm and later helped with custom harvesting for nearly 10 years. Grace was a school bus driver and a cook at the Rossville schools. She also was a seamstress and had worked for Luce Press Clippings in Topeka. She was a member of Jimmie Lillard Post No 31 of the American Legion Auxiliary and had been a past member of the Eastern Star.

She was united in marriage to DeVere Miller on December 29, 1953. They later divorced.

Funeral services will be at 11:00 A.M. Monday, July 8, 2013 at Piper Funeral Home in St. Marys. Interment will be in the Rossville Cemetery. Grace will lie in state and the family will receive friends from 5:00 until 7:00 P.M. Sunday, July 7, 2013 at the funeral home. Memorial contributions may be made to the Grace E. Miller Memorial Fund to be designated at a later date and sent in care of the funeral home.

To order memorial trees or send flowers to the family in memory of Grace Miller, please visit our flower store.