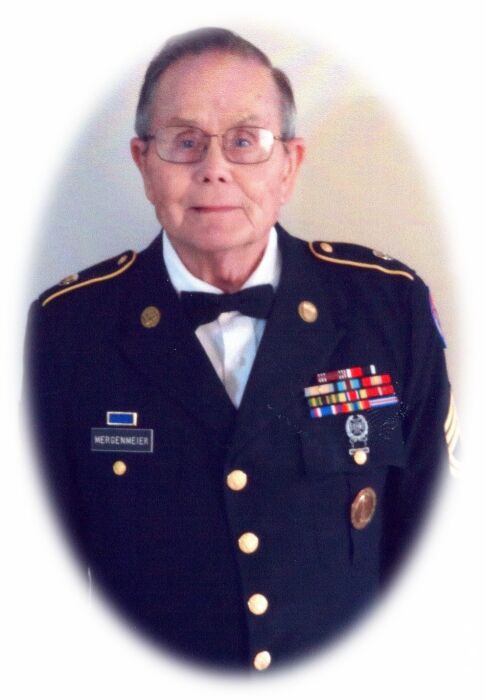 SFC George B Mergenmeier, Ret., 84, Topeka, KS, passed away peacefully on Thursday, January 28, 2021 at his home with his spouse by his side.

George was born on July 23, 1936, south of Seneca in Nemaha county, KS to George W. and Stella (Lierz) Mergenmeier.

He graduated from St. Peter and Paul Grade School in Seneca, KS. He worked several jobs as a young man and in March 1955 he enlisted in the U.S. Army where he received his GED. He served 2 years with 14 months of that time in Germany. After an honorable discharge, he worked at Goodyear Tire and Rubber, Co. Topeka, KS, from August 1957 to May of 1978.

George joined the Kansas Army National Guard in 1975. In August 1980, he was employed full time by the Guard. George went to Germany with the Fort Riley First Infantry Division on Reforger 1979, in January 1979. He attained the rank of Sergeant First Class before his medical discharge in 1986. George was proud to have served in the U.S. Army. He served as a recruiter from 1980 until he retired in 1986 and loved meeting with people at schools, fairs, celebrations, etc. in Kansas to talk about Army opportunities. He drove a truck with a “shooting gallery” that always drew a crowd where he set up.

George belonged to the Knights of Columbus, American Legion, Disabled American Veterans and the Topeka ARC. He served on the Pottawatomie County Planning Board. George was a member of Immaculate Conception Church, St. Marys, and later a member of Christ the King Church in Topeka and St. Stanislaus Church in Rossville, KS. George married Nadine Rilinger on April 12, 1958, at St. Patricks Catholic Church in Corning, KS. They lived in the St. Marys, KS area from 1959 to 1992 when he moved to the Goff area. In 1999 they moved to the Dover area in Shawnee County, and in 2018 they moved to Brewster Place in Topeka.

Mass of Christian Burial will be celebrated on Saturday, February 13, 2021 at 10:00 A.M. at Immaculate Conception Catholic Church in St. Marys.  George will lie in state and the family will receive friends from 5:00 until the Rosary at 7:00 P.M., Friday, February 12, 2021 at the church. Interment will be in Mt. Calvary Cemetery, St. Marys.

Masks will be required at all events.

Memorials may be made to Capper Foundation, (Individual Support Systems, the organization that provided care for Jim joined Cappers in 2012) or Brewster Foundation. They can be sent in care of Piper Funeral Home, 714 Maple Street, St. Marys, KS 66536.

The rosary and funeral will be live-streamed on the Piper Funeral Home Facebook page.

To order memorial trees or send flowers to the family in memory of George Mergenmeier, please visit our flower store.