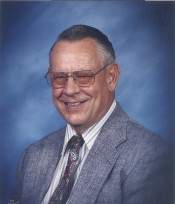 He was born March 15, 1931 at Paxico, the son of Fred W. and Thelma Gehring Barthuly. Fred graduated from Paxico High School in 1949.

Mr. Barthuly lived on a farm in the Snokomo community and operated a farm and dairy operation in partnership with his father until 1962. He was then employed by Precision Engineering of Topeka and the Hines Farm Center in Wamego until he moved to St. Marys in 1965. Fred was a long time employee of the Farmers Union Coop working in the fertilizer and chemical division, retiring in 1993 after 28 years of service. He remained a part time employee for many years after he retired. Mr. Barthuly was a member of the St. Marys United Methodist Church. He also had been a member of Pottawatomie Lodge No. 52 AF/AM until the lodge closed and he transferred his membership to Lake Lodge No. 50, Silver Lake.

On January 16, 1952 he was united in marriage to Betty Jane Martens. She preceded him in death on September 11, 1990. He was also preceded in death by three infant siblings, Dorothy, Donald and Billy

Fred later married Lavina Falk Rezac on June 7, 1991. She survives of the home.

Funeral services will at 10:30 A.M. Saturday, May 18, 2013 at the St. Marys United Methodist Church. Interment will be in the Valley View Cemetery, St. Marys. Mr. Barthuly will lie in state after 2:00 P.M. Friday, May 17, 2013 at Piper Funeral Home in St. Marys where the family will receive friends from 6:00 until 7:30. Memorial contributions may be made to the St. Marys United Methodist Church, Midland Hospice or the American Cancer Society. Online condolences may be sent to www.piperfuneralhome.com.

To order memorial trees or send flowers to the family in memory of Fred Barthuly, please visit our flower store.