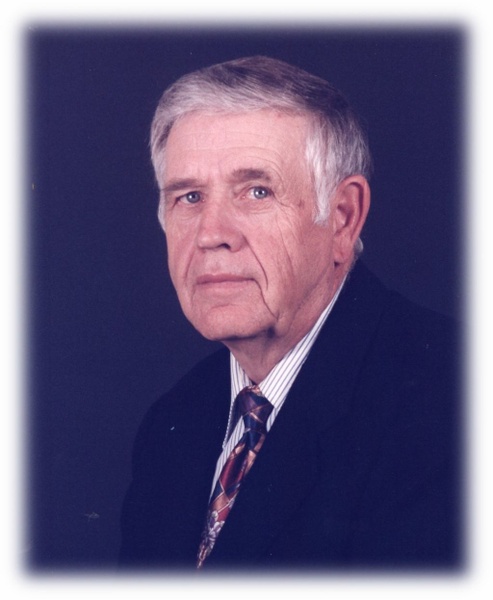 St. Marys-Everett A. "Ol Ev" Hoobler, 89, passed away late Saturday, July 7, 2018 at Oakley Place of Rossville. He was born January 4, 1929 in the Turkey Creek Community, Wabaunsee County Kansas, the son of Vernon P. and Mary M. Rake Hoobler. He attended Turkey Creek and St. Marys grade schools and St. Marys High School until moving to Rossville where he graduated. He served in the United States Army during the Korean Conflict. He lived in the Rossville community where he worked for Leo Berry Irrigation and Grain Systems. In 1961, Everett and his family moved to St. Marys when he was asked to take over the John Deere Dealership and hardware store. He brought the irrigation business to St. Marys. He and his son owned and operated Hoobler Drilling for 30 years. Everett was an Auctioneer and owned Hoobler Auction Service; he also was a real-estate agent. His greatest love was auctioneering. Everett was a member of the St. Marys United Methodist Church. He was an honorary member of the Knights of Columbus at Flush. He was a founding member and helped raise money for the Rock Springs 4-H Ranch. He was a lifetime member of the Masonic Lodge, the Scottish Rite Shrine and OES. Everett was a member of Jimmie Lillard Post No. 31 of the American Legion at Rossville and Aubert-Wall VFW in St. Marys. He enjoyed golfing, and was instrumental in starting the St. Marys golf course. He had been a member of the Manhattan Country Club and was a Cat Backer. He was united in marriage to Erma L. Wolfe on February 9, 1951 at Topeka. She preceded him in death on September 25, 2017. He was also preceded in death by his parents; brothers, Harold, Lloyd, Ray, Albert and Dwight Hoobler; his sister, Mildred Ronsee. Survivors include two brothers, Forest Hoobler, Topeka and Lester Hoobler, Seattle, WA; his children, Dan (Angie) Hoobler, Wamego and Jayne (Doug) Wolf, Hope; granddaughters, Sara (Dale) Nordlund, Valley Falls, Olivia Wolf, Wichita, Valery Wolf, York County, Maine and Elizabeth (Chris) Giestina, Loveland CO.; twin great-granddaughters. Military Graveside Funeral services will be 10:00 A.M. Thursday, July 12, 2018 at the Kansas Veterans' Cemetery with interment to follow. The family will receive friends from 6:00 until 8:00 P.M. Wednesday, July 11, 2018 at Piper Funeral Home in St. Marys. Memorial Contributions may be made to the Kansas 4-H Foundation, 116 Umberger Hall, 1612 Claflin Rd., Manhattan, Kansas 66506. Online condolences may be sent to www.piperfuneralhome.com.

To order memorial trees or send flowers to the family in memory of Everett Hoobler, please visit our flower store.