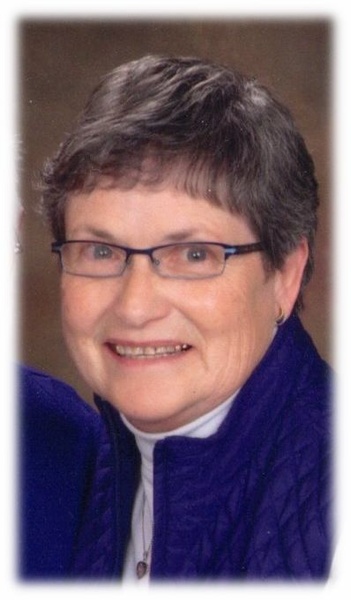 Harveyville-Evelyn F. Musick, 75, passed away Saturday, March 30, 2019 at her rural Harveyville Home. She was born December 15, 1943 in rural Lyon County, the daughter of Carl Oscar and Ethel May Adams Halberg. She attended No. 52 rural school until her fifth grade year and then attended Harveyville Grade School. She graduated from Harveyville High School with the class of 1961 where she was the Salutatorian. She received her Associate Degree from KSTC in Emporia. Evelyn's major at Washburn University was in General Business. She graduated cum laude with a Bachelor of Business Administration on May 16, 1997. Evelyn worked for the State of Kansas for many years. She retired from the state then went back to work for them, and was currently working in the Department of Agriculture. Evelyn was a member of the Harveyville United Methodist Church, and was a member of the Eastern Star. She was united in marriage to Charles E. Musick on December 21, 1963 at the Stotler Community Church near Miller. He survives of the home. Other survivors include three sons, Doug (Cathy) Musick, Manhattan, Darin (Elaine) Musick, Olpe and Dason Musick, Harveyville; her daughter, Pamela Bafaro, Leavenworth; her sister, Joyce Schmid, Lawrence; 9 grandchildren and 2 great-grandchildren. Graveside inurnment services will be at 1:00 P.M. Friday, April 5, 2019 at the Harveyville Cemetery with a visitation following the service at the Harveyville United Methodist Church. Memorial contributions may be made to the Eskridge Friendly Farmers 4-H Club and sent in care of Piper Funeral Home, 714 Maple Street, St. Marys, Kansas 66536. To read a full obituary or leave online condolences go to www.piperfuneralhome.com.

To order memorial trees or send flowers to the family in memory of Evelyn Musick, please visit our flower store.