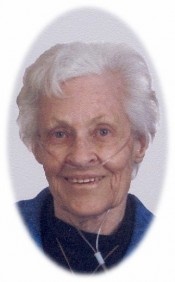 She was born November 5, 1928 at Loveland, TX, the daughter of Riley and Twila Beatrice Hern Hodges. Emma lived in Texas until the age of 10 when she moved with her family to California. She later moved to Michigan living there until moving to St. Marys in 1979. She moved to Minnesota and later moved back to St. Marys in 2004.

On November 9, 1946 she was united in marriage to John Shibler at San Bernardino, CA. They celebrated 66 years of marriage, he survivives of the home.

Requiem Mass will be at 10:00 A.M. Monday, April 22, 2013 at St. John Vianney Catholic Church in Maple Hill. Interment will be in the Holy Cross Cemetery at Emmett. Mrs. Shibler will lie in state from 5:00 until 7:30 P.M. Sunday, April 21, 2013 at Piper Funeral Home in St. Marys where there will be a rosary recited at 7:30 P.M. Online condolences may be sent to www.piperfuneralhome.com.

To order memorial trees or send flowers to the family in memory of Emma Shibler, please visit our flower store.