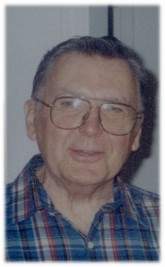 St. Marys - EuGene F. McKenzie DDS, 80, died Tuesday, December 3, 2013 at the St. Marys Community Hospital, the result of complications from a stroke he suffered a year ago.

He was born August 25, 1933 in Hannibal, MO, the youngest of eight children of the late Leo and Grace Elliston McKenzie. On June 15, 1957 he was united in marriage to Patricia Passman at Immaculate Conception Catholic Church in St. Marys. EuGene graduated from McCooey High School in Hannibal in 1952 and then enlisted in the US Army where he served for two years during the Korean War. He graduated from St. Benedict's College in Atchison in 1959 and UMKC School of Dentistry in Kansas City in 1963.

While attending dental school, he drove a bookmobile for Kansas City area libraries and worked for Mr. Claude Clark, a builder in Overland Park, KS. After receiving his doctorate, Dr. McKenzie worked in Topeka at a clinic for underprivileged children and on weekends for Dr. Al Morley in Atchison. A year later he opened his dental office in Dr. Fred Brown's Clinic in St. Marys. Dr. McKenzie practiced in St. Marys for 46 years before his retirement in 2010. He was a member of Immaculate Conception Catholic Church and the Kansas Dental Association. Dr. McKenzie sang in various choirs and had sung at many weddings and funerals. He is survived by his wife, Patricia, of the home, and his son, John Patrick McKenzie, of Rockville, MD.

Mass of Christian Burial will be celebrated at 10:00 A.M. Saturday, December 7, 2013 at Immaculate Conception Catholic Church in St. Marys. Interment will be in Mt. Calvary Cemetery, St. Marys. Dr. McKenzie will lie in state after 2:00 P.M. Friday, December 6, 2013 at the church, where the family will receive friends after 5:00 P.M. and the rosary will be recited at 6:00 P.M. Memorials are asked to be in the form of Masses for the repose of his soul and may be sent to Piper Funeral Home, 714 Maple Street, St. Marys, KS 66536. Online condolences may be expressed at www.piperfuneralhome.com.

To order memorial trees or send flowers to the family in memory of Dr McKenzie, please visit our flower store.