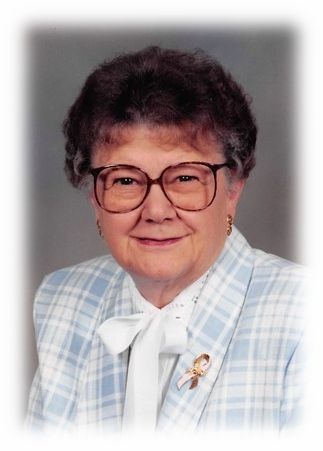 Dorothy Kathleen Mergenmeier "Dot" to her friends 92, passed away Monday, November 12, 2018 at Brewster Place in Topeka. She was born February 18, 1926 on a farm near Oneida the daughter of Valentine E. and Ida C. Holthaus Koehler. Dorothy graduated from Saints Peter and Paul Catholic High School in 1943. Prior to her marriage Dorothy was employed at Elgin Watch Company in Lincoln, NE and in the Nemaha County Clerk's Office. She lived most of her life in St. Marys moving to Topeka several years ago. Dorothy was an Avon representative and worked at Katie's Corner and DeVader Floor Covering all in St. Marys. She was a member of Immaculate Conception Catholic Church and attended St. Matthew Catholic Church in Topeka. Dorothy was an avid quilter, she enjoyed crocheting and playing cards. She truly enjoyed going to Vegas and was a "Jackpot Queen". On September 11, 1954 she was united in marriage to the love of her life Melvin G. Mergenmeier at Saints Peter and Paul Church in Seneca. They were married over 60 years before his death on June 28, 2015. She was also preceded in death by her parents; an infant daughter, Karen Ann; siblings, Walter Koehler, Anna Marie Koehler, Valentine J. "Buddy" Koehler, Margie Sheik, Rachel Hunninghake and Kenneth Koehler. Survivors include her children, Kathy Ann (Douglas) Basler, Wichita, Dennis Melvin (Madonna) Mergenmeier, Topeka and Stephen Lynn (Douglas Towner) Mergenmeier, Las Vegas, NV; 10 grandchildren and 21 great-grandchildren. Mass of Christian Burial will be celebrated at 10:00 A.M. Saturday, November 17, 2018 at Immaculate Conception Catholic Church in St. Marys. Interment will be at 2:00 P.M. Saturday in Saints Peter and Paul Catholic Cemetery in Seneca. Mrs. Mergenmeier will lie in state and the family will receive friends from 5:00 until the rosary at 7:00 P.M. on Friday, November 16, 2018 at Piper Funeral Home in St. Marys. Memorial contributions may be made to Immaculate Conception Catholic Church (Social Concerns) and sent in care of Piper Funeral Home, 714 Maple Street, St. Marys, Kansas 66536. To leave online condolences go to www.piperfuneralhome.com. Flower Mill-785-456-7447

To order memorial trees or send flowers to the family in memory of Dorothy Mergenmeier, please visit our flower store.