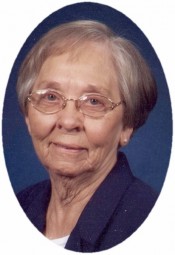 She was born November 10, 1931 at Spivey, the daughter of Ross and Lota Pepper Vanlandingham. Donna grew up in Spivey and graduated from Kingman High School in 1949. She graduated from Wesley School of Nursing at Wichita in 1942. Donna also attended Washburn University in Topeka.

Mrs. Tarbutton was a nurse at the Topeka V.A. Hospital in Topeka for several years. She then was a stay at home mother while her children were young. Donna returned to the work force as a nurse at the St. Marys Manor and became the Director of Nursing. She later was the Administrator retiring in the early 90's. Mrs. Tarbutton was a consultant for the Manor in Medical Records working until 2004. She was a member of the Maple Hill Community Congregational Church and a 50 year member of the OES at Kingman. She was a past member of the National and State Nurses Association.

On July 24, 1954 she was united in marriage to Joseph E. Tarbutton in Topeka. He survives of the home.

Funeral services will be at 10:30 A.M. Monday, April 14, 2014 at the Maple Hill Community Congregational Church. Interment will be in the Maple Hill Cemetery. Mrs. Tarbutton will lie in state and the family will receive friends from 4:00 until 6:00 P.M. Sunday, April 13, 2014 at the Church. Memorial contributions may be made to the Maple Hill Community Congregational Church, St. Marys Manor Bus Fund or Grace Hospice and sent in care of Piper Funeral Home, 714 Maple St, St. Marys, Kansas 66536. Online condolences may be sent to www.piperfuneralhome.com

To order memorial trees or send flowers to the family in memory of Donna Tarbutton, please visit our flower store.