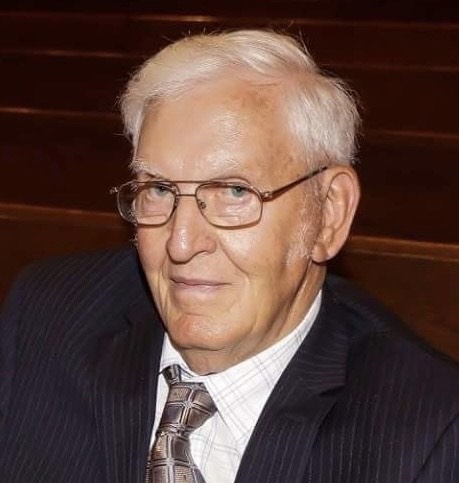 Donald (Don) August Ronnebaum, 88, passed away peacefully after his lengthy battle with cancer on Saturday, March 5th, 2022, at Aldersgate Village in Topeka. Don was born in Baileyville, KS on June 28th, 1933, the son of Joseph and Elizabeth (Reinecke) Ronnebaum. As he grew up, he worked on the family farm with his father, five brothers, and sister. Don was then drafted into the United States Army in 1951. In his time with the Army, he served in Washington D.C.

He married Rose Marie Martin on October 27th, 1956, in Hanover, KS. Shortly after getting married, they purchased a farm near Delia, KS, where they raised their six children. This is where Don passed along his love for fishing to his children, as they spent many hours fishing at their farm ponds. Don worked as a Machinist at Allis Chalmers in Topeka, and then later worked at Jeffery Energy Center as a Machinist as well, where he retired from in 1995. He was a member of the United Electrical Workers (UEW) of America and the International Machinist Union.

Don and Rosie moved to St. Mary’s in 1996, where they built their retirement home. They lived many happy years together in this home, where they created and shared memories with their children and grandchildren. In his retirement years, Don enjoyed spending time restoring cars in his shop, fishing, and camping. Don and Rosie spent every summer in their camper at Tuttle Creek Lake. The two were happily married for 60 years and Don loved nothing more than spending time with Rosie. She preceded him in death in 2017, after her hard-fought battle with cancer in which he was always by her side. He also experienced a great loss in his son David, in 2019. After Rosie and David’s deaths, one of his greatest joys was being able to go on the Kansas Honor Flight with his granddaughter, as his student guardian. This was a time when he was able to reflect on his days in the service, and some of the moments that truly shaped his life.

Don had many happy memories of the time spent with his children, grandchildren, and great-grandchildren. He was a man of great Christian faith and instilled that in his children as well. Don and Rosie were longtime parishioners of Immaculate Conception Catholic Church in St. Mary’s. He was also a 3rd degree Knight in The Knights of Columbus.

Don will lie in state and the family will receive friends from 6-7 pm Tuesday, March 8, 2022 at Piper Funeral Home in St. Mary’s, KS. The rosary will follow at 7:00 pm, after the conclusion of the visitation. Mass of Christian Burial will be celebrated at 10:00 am on Wednesday, March 9th, 2022, at Immaculate Conception Catholic Church. Don will be buried next to his loving wife, and son at Mount Calvary Cemetery in St. Mary’s. Memorial contributions can be made to Immaculate Conception Catholic Church Food Pantry and sent in care of Piper Funeral Home, 714 Maple Street, St. Mary’s, KS, 66536.

To order memorial trees or send flowers to the family in memory of Donald Ronnebaum, please visit our flower store.