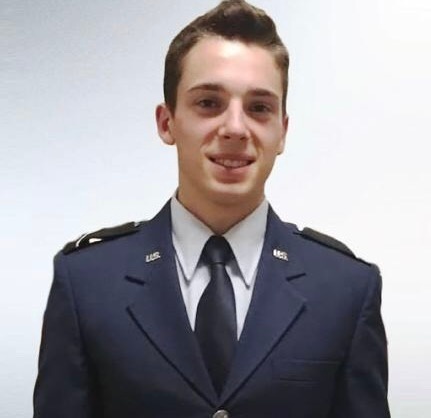 Son of Dylan and Joanne McDonald

Transfer of the Body to the Chapel

THE AUDITORIUM IS OFF LIMITS UNTIL 8:00 AM SATURDAY

Followed by a Formal Procession on foot to the Cemetery

from the Auditorium. Everyone is invited to follow behind

after the Celebrants, Pall Bearers with Casket, Family,

The Knights of The Immaculata and Cadets.

POT LUCK RECEPTION at 1:00 PM, in the Auditorium:

All parishioners are asked to bring food for their families and 2 extra for guests. Food is to be brought to the kitchen next to the Auditorium

any time after 8:00am until the Mass and after the Funeral Mass.

During the meal, the McDonald sons would like to play the music

they and Daniel so loved. EVERYONE IS WELCOME!

Daniel Joseph Dominic McDonald, 18, died Saturday, September 16, 2017, in an auto accident west of St. Marys. He was born July 18, 1999, in Malone, NY. the son of Dylan J. and Josephine A. Inglima McDonald. Daniel graduated from St. Marys Academy in 2017 and was a student at Kansas State University in Manhattan. He was a scholarship cadet in the Air Force ROTC at KSU. Daniel was a member of the Sodality of the Knights of the Immaculata where he was the bandleader and music teacher. While in high school he participated in football. Daniel was a member of Assumption Chapel. He had worked at Sugar Creek in St. Marys and The Onyx Collection in Belvue. Daniel was preceded in death by his grandfathers, Angelo Inglima and Richard McDonald; a baby brother Dylan Joseph Gabriel McDonald. Survivors include his parents, Dylan and Josephine, his siblings, Elizabeth, Jeanette, James, Joseph, Mary, Matthew, Sean, Christopher, Michael, Patrick, and Brendan; grandmothers, Ann Inglima and Barbara McDonald. Requiem Mass for Daniel J. McDonald will be at 9:00 A.M. Saturday, September 23, 2017, at the auditorium on the campus of SMAC. Interment will be in Our Lady of Peace Cemetery. Daniel will lie in state at the auditorium on Friday, September 22, 2017, from 2:00 P.M. until the Rosary at 5:00, and then again from 7:00 until 9:00 P.M. There will be an all-night vigil in the Chapel.
To order memorial trees or send flowers to the family in memory of Daniel McDonald, please visit our flower store.