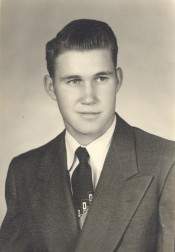 He was born February 13, 1937 at Holcomb, MO, the son of Byron and Amy Borer Mahan. At an early age he moved to the Garnett community and graduated from Parker High School in 1955.

Dale had worked for the State of Kansas for 45 years retiring in 2000. He worked for the Highway Commission and later for the Kansas State Board of Agricultural Division of Resource as the Water Commissioner. He had lived in the Rossville community for many years. Dale was very community minded and was instrumental in the early years of the Tall Corn Festival. He was a past member of the Lions Club. He coached youth softball, baseball and basketball. Dale was an avid fisherman, hunter and golfer. He was proud of his 45 years of service with the State of Kansas. Dale was very involved with his grandchildren and never missed any of their sporting events.

He was preceded in death by his parents, brothers, Edwin, Delmer, Walter, Jack and Leon Mahan and two sisters Sylvia Gibbons and Doris Jean Ackerman.

On March 16, 1958 he was united in marriage to Louzetta Moore at Yates Center. She survives of the home.

Funeral services will be at 1:00 P.M. Wednesday, July 3, 2013 at the Rossville United Methodist Church. Interment will be in the Rossville Cemetery. Memorial contributions may be made to the Jimmy V Foundation for Cancer Research or the Kathleen Mai Respiratory Research Fund and sent in care of Piper Funeral Home, 714 Maple, St. Marys, Kansas 666536.

To order memorial trees or send flowers to the family in memory of Dale Mahan, please visit our flower store.