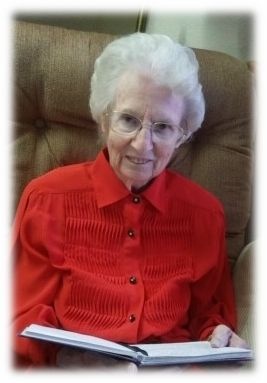 She was born on October 5, 1922, in rural Beaver, OK., the daughter of Chris H. and Cora Chappell Winfough,  She graduated from Darrouzett High School, Darrouzett, TX.

Cornelia Winfough and James M. Brian were united in marriage in Beaver, OK., on October 8, 1941.  She and Jim owned a grocery store at Capital Hill, OK.  After moving to Kansas in 1948, she became a farmer’s wife for several years, helping her husband.  In 1954, they moved their family to Topeka for a short time, then to Meriden in 1959.  They lived in Meriden until moving to Rossville in 1975.  During her life, she worked at Pelletier’s Store in Topeka and then became a cook at Topeka High School.  Later in life, she became a cook at Meriden Grade School.  She retired from there after several years.  In retirement, she and Jim enjoyed traveling in their campers they restored.  They celebrated 59 years of marriage before his death.

She was preceded in death by her parents, four brothers, Calvin, Chester, Wayne, and Otis, her husband James in 2001, and a son-in-law Jim Nettles.

Funeral services will be at 2:00 P.M. Friday, September 4, 2020, at the Rossville Christian Church.  Mrs. Brian will lie in state, and the family will receive friends from 5:00 until 7:00 P.M. Thursday, September 3, 2020, at the church.  Interment will be in the Havensville Cemetery, Havensville.  Memorial contributions may be made to Interim Hospice and sent in care of Piper Funeral Home, 714 Maple Street, St. Marys, Kansas 66536

To order memorial trees or send flowers to the family in memory of Cornelia Brian, please visit our flower store.