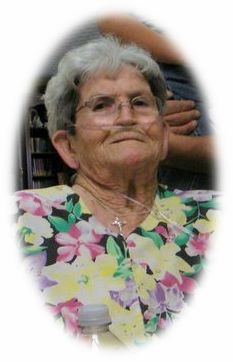 She was born January 10, 1932 on a farm south of Rossville the youngest of 10 children of Henry and Edith Burns Martin. Catherine attended Rossville Schools.

She and her husband Joe owned and operated C&J Café in Emmett for several years. Catherine later worked at Jeffrey Energy Center for several years. She was a member of Holy Cross Catholic Church and the altar sodality at the church. Catherine was a member of the Citizen Band Potawatomi Nation and the Jolly Workers Club. She was an avid sports fan.

On August 26, 1950 she was united in marriage to Joseph Charles DeVader at Rossville. He preceded her in death on June 1, 2002. She was also preceded in death by an infant son, Ronald L. DeVader and a daughter Roberta K. DeVader-Dale on February 22, 2011, and 7 siblings.

Mass of Christian Burial will be celebrated at 10:00 A.M. Saturday, April 12, 2014 at Immaculate Conception Catholic Church in St. Marys. Catherine will lie in state from 3:00 until 6:00 P.M. Friday, April 11, 2014 at the church where a rosary will be recited at 6:00 P.M. Interment will be in Holy Cross Cemetery, Emmett. Memorial contributions may be made to the Catherine L. DeVader Memorial Fund and sent in care of Piper Funeral Home, 714 Maple St, St. Marys, Kansas 66536. Online condolences may be sent to www.piperfuneralhome.com.

To order memorial trees or send flowers to the family in memory of Catherine DeVader, please visit our flower store.