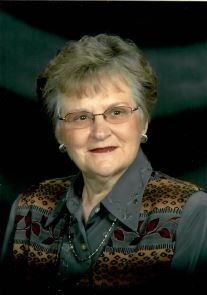 Audrey was born on September 14, 1936 in Junction City, the daughter of LaVern Roland and Ethel “Marie” (Norman) Langvardt.  She was preceded in death by her parents and her brother, Howard L. Langvardt.

Audrey was a graduate of Junction City High School and earned a degree in nursing from the Stormont-Vail School of Nursing in Topeka.  She enjoyed a career as a registered nurse for nearly 30 years until she and her husband bought and jointly ran Riat’s Liquor Store in St. Marys.  As a member of the Chamber of Commerce, she was involved in the organization of numerous community events.  Audrey joined the Catholic church and was an active member of Immaculate Conception Catholic Church in St. Marys where she especially enjoyed singing in the choir.

On September 20, 1958 Audrey was united in marriage to Raymond Aloysius Riat at Immaculate Conception Catholic Church.  Raymond preceded her in death in 2017.  She cherished their 59 years together at home in St. Marys raising their family, working, and creating lifelong friendships.

Mass of Christian burial will be celebrated Friday, March 5, 2021, at 10:00 A.M. at Immaculate Conception Catholic Church in St. Marys.  Interment will be in Mt. Calvary Cemetery, St. Marys.  A rosary will be recited at 9:30 A.M. Friday at the church.  In lieu of flowers, memorial contributions may be made to the Alzheimer’s Disease and Related Disorders Association and sent in care of Piper Funeral Home, 714 Maple St., St. Marys, Kansas 66536.  To leave online condolences go to www.piperfuneralhome.com.

To order memorial trees or send flowers to the family in memory of Audrey Riat, please visit our flower store.