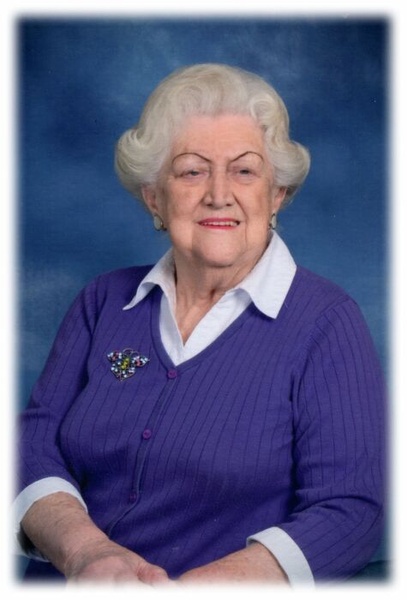 Topeka—Arlene Thompson Looker passed away on April 13, 2021, at the University of Kansas Hospital, St. Francis Campus in Topeka.  She was born October 22, 1930, in Delia to Eleanor (Simecka) Thompson and Curtis Thompson.  She graduated from Delia High School in 1948. She spent two years teaching in a rural one-room schoolhouse.

Arlene was a member of West Side Christian Church.  She held several positions: Chairperson for Delia Alumni High School Reunion, supervisor judge for Shawnee County elections, member of ABWA, served Stonecraft Ministry for years.  She enjoyed Civic Theater as a hostess for fund-raising events.  Arlene was a member of the YWCA therapeutic exercise group for 20 years.  Her greatest joy was serving the Lord as a caregiver for relatives and church shut-ins.  Arlene was Mrs. Santa Claus at Christmas for 30 years in Colorado and later for nursing homes in Rossville and St. Marys and the Presbyterian Manor.

The name “General” was given to Arlene by volunteering for community service in Denver.  She had over 80 men and women in her group volunteering in charity events in Denver and Boulder. Cancer drives, Kops & Kids. Cherry Creek Sneak, autism, and the Denver Symphony for over 10 years are a few of the charities she helped with.  Before retiring from Colorado Blue Cross & Blue Shield with 25 years of perfect attendance, she received a special large salad bowl engraved with “Outstanding Community Service,” 1989-1990 from the Colorado Lt. Governor.

Arlene was preceded in death by her parents, brother Marvin Thompson, a sister, Neysa Porter, her son, Dennis Holcomb, in March of 1996, and a daughter-in-law, Linda Holcomb.

A Celebration Of Life Visitation will be from 1:00 to 3:00 P.M. Friday, July 9, 2021, at the funeral home.  Inurnment was private at Adrian Cemetery.  Memorial contributions may be made to the Topeka-Shawnee County Library and sent in care of Piper Funeral Home, 714 Maple, St. Marys, Kansas 66536.

To order memorial trees or send flowers to the family in memory of Arlene Looker, please visit our flower store.