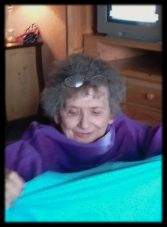 She was born April 10, 1934 at Wamego, the daughter of the late Ernest R. Schleif Sr., and Mrytal Bowman Schleif. Anna grew up in the Wells Creek community and graduated from Wamego High School. She also graduated from Stormont Vail School of Nursing in Topeka

Mrs. Valdez was a registered nurse and lived and worked in Wisconsin for many years. She returned to Kansas and had lived in Perry, St. Marys and Topeka and had worked at the Westmoreland Hospital.

Funeral services will be at 7:30 P.M.Friday, November 8, 2013 at Piper Funeral Home in St. Marys. The family will receive friends from 6:00 until 7:00 P.M. Friday before the service. Interment will be private in the ValleyViewCemetery. Memorial contributions may be made to the American Diabetes Association and sent in care of the funeral home.
To order memorial trees or send flowers to the family in memory of Anna Valdez, please visit our flower store.