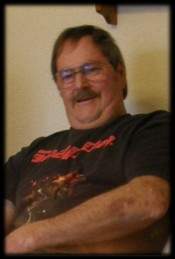 He was born February 12, 1955 at Topeka, the son of Curtis and Helen J. Sage Musick. Alvin grew up in the Dover community and graduated from Mission Valley High School in 1973.

Alvin lived all of his life in the Dover and Topeka areas, he was an auto mechanic and had most recently worked for Six Auto in Topeka.

He was preceded in death by his parents, a brother Thomas and a son Brandon.

On June 12, 1998 he was united in marriage to Karen Parsons at Topeka. She survives of the home.

Funeral services will be at 10:00 A.M.Monday, December 30, 2013 at the Dover Federated Church. Interment will be in the Dover Cemetery. Alvin will lie in state and the family will receive friends from 4:00 until 6:00 P.M.Sunday, December 29, 2013 at the Dover Federated Church. Memorial contributions may be made to Piper Funeral Home to help offset funeral expenses and may be sent to 714 Maple St., St. Marys, Kansas66536.
To order memorial trees or send flowers to the family in memory of Alvin Musick, please visit our flower store.