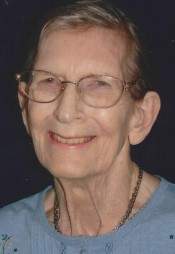 Adeline was born on June 29, 1923 in Belle Fourche, South Dakota, the youngest of six children of Thomas and Sophie Melvin. She married Donald D. Dickinson and had five children. Over the years she lived in South Dakota, Arizona, California, Colorado, Oregon, Washington, Wyoming and North Dakota. She spent the last few years of her life at the Maddock Memorial Home.

Adeline was a committed traditional Catholic who followed the pre-Vatican II practices of the Roman Catholic Church. She was a member of Our Lady of Sorrows Church in Crookston, Minnesota and traveled there for the traditional Latin Mass until her health no longer allowed.

She enjoyed discussing politics and religion with family and friends over coffee and cigarettes. She also enjoyed sightseeing, reading, and collecting books and religious goods.

Adeline was preceded in death by her husband: Don; sons: Jerome and Donald and a daughter Terry Stadum.

Requiem Mass will be at 9:30 A.M.Monday, June 10, 2013 at Assumption Chapel in St. Marys. Burial will be in the Our Lady of Peace Cemetery. Piper Funeral Home is in charge of Kansas arrangements. Online condolences may be sent to www.piperfuneralhome.com.

To order memorial trees or send flowers to the family in memory of Adeline Dickinson, please visit our flower store.